Taylor Monaco has been appearing on Kristin Cavallari’s new reality show Very Cavallari, working as a model for Cavallari’s brand Uncommon James for their social media and promotional shots. She is also the BFF to Cavallari’s social media director, Shannon Ford. This season, on the show, Monaco tried to apply for a full time position with Uncommon James, but she was shot down because of her friendship with Ford. Despite this, Monaco still got on quite well with boss Cavallari, sharing with her that she was pregnant, very early on in the pregnancy.

After revealing that she was pregnant, Monaco started adjusting to the thought of motherhood, though she and her then-boyfriend, Mike, were already parents to a golden retriever named Wilbur. Mike, who works in the entertainment industry, enlisted Ford to help him plan out a proposal and even pick out a ring. The proposal plays out on the 2018 season finale of Very Cavallari and, in case you didn’t figure it out, Monaco says “yes”.

In fact, the happy couple has already gotten married and Ford served as a bridesmaid at the wedding. The two tied the knot on May 10, 2018. Their engagement was announced on March 7, 2018. Mike posted photos from the proposal on Instagram, writing, “Today is the best day of my life! Love you,” to Monaco.

Today is the best day of my life! Love you @tayloramberlong

When talking about her wedding dress on social media, Monaco revealed her dress info on Instagram, writing, “I went to one dress shop, tried on less than ten dresses. I picked 8 very similar lace dresses and 1 very different tulle dress. I had my fairy tale princess moment in that special @sarahsevenpiece I never thought I would have pulled off the rack that morning.”

The couple’s baby girl is due in October 2018, according to Bustle, and they have already picked out a name. Their little girl will be called Walker Rose Monaco.

In addition to getting married, since finding out they were having a baby, Monaco and her man have moved into a home together and adopted another golden retriever, a puppy named Gilford.

So who are Monaco and her husband? Well, according to E!, Monaco was born in Oahu and then lived in Alabama until she moved to Nashville in 2015. According to Monaco’s Very Cavallari bio, “Taylor plans to take after her father who owns several different business in Honolulu and start a business of her own with Nashville roots. She has a yet-to-be-announced business venture in the works, but until then, she works as a model for the Block Agency and occasionally models for Uncommon James. Recently married- Taylor, her husband, Mike, and their golden retriever, Wilbur are excited to welcome a little girl and future Little James model to their family in October! New husband, new house, new baby and new puppy all within 8 months….it’s safe to say Taylor is staying pretty busy.”

After finding out she was pregnant, on Very Cavallari, Monaco said, “I’m nervous as hell, but I like weirdly just got a little bit excited.” 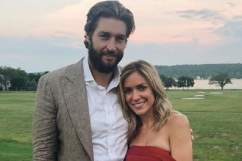