Teairra Mari has a lot on her plate this season on Love and Hip Hop. She ends up dealing with multiple scandals, including a married boyfriend and a leaked sex tape issue. On the show, Teairra is dating a man named Akbar Adul-Ahad and VH1 reported that the guy she is dating is bad news. He apparently has a side chick, but is also reported to be married.

According to Bossip, Teairra’s now ex-boyfriend is, indeed, actually married, which plays out this season. His wife is a designer named Sade Abdul-Ahad, of Folasade Clothing, and she claimed to The Jasmine Brand that Teairra has been after her husband, even though she supposedly knew he was taken. So, according to Sade, Teairra knew all along that Akbar was married. But, did she really? Sade alleged that, “Well I think Teairra is one delusional individual. She knew about me but didn’t care. She wanted Akbar to leave me and be with only her. She spoof app’d me calling my phone as if she was Akbar. She also called me from 10 different numbers and I still to this day don’t know how she even got my number! She stalks my IG page and has created several fake pages to leave nasty comments under my pictures.”

Nothing real can be threatened! #WeWantAllTheSmoke

Sade then added that, “Akbar initially wanted to do business with Teairra, but she fell for him and wanted a relationship.” She then said that Akbar “helped produce and write her new singles, “Bae-Cation” and “Fucked Up” that are currently on I-tunes. He purchased wardrobe for her, let her use one of his cars being that she doesn’t have one. He also went as far as helping her pay her rent. And because of his generosity we are in the situation we are in now!”

When any cheating issues in Teairra’s former relationship with Akbar is concerned, Sade weighed in, saying, “I am curious as to why Teairra claims Akbar cheated on her when he is married? How do you cheat on someone when you knew this man was married?”

Thank you to everyone for your prayers and kind words during this time. ?? #ThisTooShallPass

Over the summer, Akbar told TMZ that even though Teairra is suing him, she still has been trying to stay close to him. In addition, he said that Teairra’s Love and Hip Hop costar, Milan Christopher, claimed Teairra possibly posted the explicit footage herself. Akbar seems to be siding with Milan.

Another person who says that Akbar didn’t release the sex tape is actually his wife, Sade. She defended her husband to The Jasmine Brand, saying, “Akbar did not release that tape. Teairra has a lot of friends who have access to her personal information! Hints why Milan [Milan Christopher] had a picture posted on her page! I’m not saying he released it, but no one knows who did it. She is an alcoholic. The day she smashed out the windows to our cars she was drunk!”

Sade and Akbar appear to still be together today. 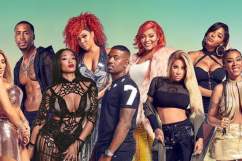