The 2018 season of The Bachelorette winds down, with Becca Kufrin choosing just one man to spend the rest of her life with. Before we get into Kufrin’s winner, PLEASE STOP READING IF YOU DO NOT WANT TO KNOW ANY SPOILERS. With that said, let’s get into all the details on the man who won Kufrin’s heart, the controversy surrounding the relationship, the winner’s past, and where Kufrin is in her relationship with the winner today.

1. There Are Rumors That Becca Kufrin Is Still In Love With the Runner-Up

Photo Credit: ABC/Instagram(Pictured: Garrett Yrigoyen on the left and Blake Horstmann on the right)

Going into her overnight date with Yrigoyen, Becca Kufrin told the cameras that she wanted to make sure Yrigoyen didn’t have any doubt in their relationship, but, according to recent reports, second thoughts may have set in. These doubts, however, according to Reality TV World, are with Kufrin. A source has stated to Life & Style that Kufrin still wonders what would have happened if she had chosen runner-up Blake Horstmann. Of course, these could easily just be rumors.

The insider told Life & Style that, “Becca told herself that she’d never go back on her choice. But the truth is, she left the finale in love with both men. And still, months later, she’s in love with the runner-up … She’s still engaged, of course, but Becca and the winner just aren’t as compatible as she had thought … If things don’t work out with the winner, Becca will definitely call the runner-up and hope that he still feels the same way.”

Of course, this is not Kufrin’s first time being engaged, as she got engaged on the previous season of The Bachelor, to race car driver Arie Luyendyk Jr. Luyendyk then broke up with Kufrin for his runner-up. But, Kufrin has said several times on the show this season that she does not want to follow in the footsteps of Luyendyk and hopes to be as honest with her suitors as possible. Kufrin made sure that she also did not fall into the trap of telling both men in the final 2 that she loved them. Luyendyk told his final 2 “I love you,” which probably didn’t help the situation.

2. Garrett Yrigoyen Did Not Expect to Get the First Impression Rose

During the premiere episode of the season, former Bachelorette stars Kaitlyn, JoJo, and Rachel stopped in to let Kufrin know that all three of their fiances were first impression rose winners. Reality Steve reported that, “They certainly make it a point to remind everyone that all 3 men that they’re with are men they gave their first impression rose to AND got the first kiss of the season. Something Becca does with Garrett this episode.”

While Yrigoyen got the first impression rose, he did not get the first solo date. That actually went to runner-up Blake Horstmann. In the end, Horstmann, just like Yrigoyen, professed his love for Kufrin, though he often voiced worry about being in a competition for Kufrin’s heart. 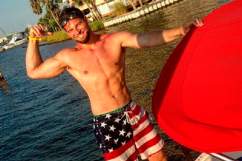 3. Becca Kufrin Said Yrigoyen Reminds Her of Her Father

Not a day goes by that I don't think about the angel that is Steven Karl (with a K) Kufrin. He gets the Father-of-a-Lifetime award for putting up with me between the ages of 3-17. Happy Father's Day to the most suave man this side of the Mississippi has ever seen (see slide 2 for reference)

Kufrin said on the show this season that she could really rely on Yrigoyen, no matter what. She also said that there’s something truly special about him. On the premiere episode, Kufrin confessed to the cameras that, “Garrett does remind me of home. I grew up fishing and hunting with my dad, and to know that Garrett does that, I’m like, ‘Oh my God, you would fit in so well …’ My family would love him. I really like Garrett, and quite honestly, I really like all of these guys so far.”

Kufrin’s father, Steve, died of cancer in 2009. He was diagnosed with Glioblastoma in 2004 and fought for five years before his death. Kufrin was only 19 years old at the time of her dad’s passing. When Kufrin appeared on The Bachelor, she told Arie Luynedyk Jr. that she and her family were actually blessed because her father lived for years longer than a brain cancer patient normally would last.

Cancer not only affected Kufrin’s dad, but it also hit her mother as well, who is a breast cancer survivor. In October 2015, Kufrin posted a heartfelt message, along with a photo, about her mother, Jill,on her Instagram account, writing, “This beautiful soul never ceases to amaze me. She has endured two major surgeries in the past couple weeks, countless appointments with surgeons and oncologists, and continually deals with uncertainties that come holding cancer’s hand. And yet she has shown more strength, grace and positivity than most people will ever have in an entire lifetime. This picture was taken just two days after her initial surgery and captures her spirit radiantly. Here’s to my momma bear, best friend, and my #WCW today and everyday. #fcancer #breastcancerawareness.”

As the season airs, there are usually a few scandals that come to light when it comes to the contestants. Usually the scandals have to do with past relationships, cheating allegations, or DUI arrests. But, this season, cast member Lincoln Adim was revealed to be involved in a domestic assault case. ABC generally runs extensive background checks, but they had somehow missed this incident. In the past, when it comes to any scandals surrounding winners of the series, they have to do with family rifts or past relationships.

This season, however, Garrett Yrigoyen was on the hook for some offensive social media activity. According to Variety, Yrigoyen had liked some Instagram posts that were mocking trans people and Parkland students. To boot, prior to Yrigoyen deleting the incriminating Twitter account, former Bachelor contestant Ashley Spivey posted screenshots of Yrigoyen’s social media activity.

Yrigoyen issued a public apology when the news broke and he said he had no idea what some thoughtless social media clicks would cause. He also said that he never thought he would be on such a public platform or involved in a popular national television show.

5. “The Bachelorette” Winner’s Divorce Did Cast a Shadow on His Journey

Prior to becoming a contestant on The Bachelorette, Garrett Yrigoyen was in a relationship with a woman named Kayla Cunningham and the two got married. But, not long after their union, they got divorced. Throughout the course of the season, this has cast a shadow on some of Yrigoyen’s dates and, of course, Becca Kufrin’s family had their reservations. On the finale episode, Yrigoyen opened up about his divorce to Kufrin’s Uncle Chuck.

ABC reported that, on the finale, “Despite Garrett being nervous about meeting Becca’s family, he is intent on proving himself to them. Becca’s Uncle Chuck has been the strongest male figure in her life since her father died. The hopeful suitor opens up to him about his divorce and what he has learned from his past mistakes. Emily [Becca’s sister] warns him not to break her sister’s heart, but an emotional Garrett makes his case, explaining how much he loves Becca and wants to care for her forever.” Despite the concerns, Kufrin’s family appears to like both Yrigoyen and runner-up Horstmann.

Since the 2018 season of The Bachelorette started airing, Yrigoyen’s ex-wife has not spoken out to the public or media about their marriage. During the overnight dates, Yrigoyen did confess to Kufrin that he worried about getting engaged and having it not work out again. Yrigoyen also told Kufrin that he loved her and that he hopes she’s the last person he’ll ever have to say that to.