The Happytime Murders is currently in theaters, and the high-concept comedy pairs a cast of puppets with superstar Melissa McCarthy. The film has generated considerable buzz around its unique premise, and some fans are wondering whether they should stay after the film is over to watch the credits.

Does ‘The Happytime Murders’ Have a Post-Credits Scene?

The answer is yes. While the post-credits keep from spoiling any future sequels or spinoffs, they do show behind-the-scenes footage of the trickery needed to make puppets interact with the human cast.

In an interview with Collider, McCarthy spoke on the difficulty of acting opposite puppets. “What’s crazy is that I thought it was gonna be this whole tricky thing,” she said. “I thought, “Okay, I guess it will be kinda like with a tennis ball, just ‘cause there’s no eye contact and they’re not looking at you.” What happened, about 15 minutes in, was that I bumped into Phil and I was like, “Oh, I’m sorry, Phil.” And then, I was like, “Oh, okay, I’m nuts!” We’ve had emotional scenes.”

“It’s also ‘cause there’s a crazy thing happening with what a good and incredibly grounded actor Bill Barretta is,” the actress continued. “They’re not putting wackiness on top of a puppet. It’s a really good, solid character. Within seconds, it goes away in your head and you’re having these lovely scenes, or you’re having fights. I’m weirdly constantly apologizing to Phil. Bill is laying on the ground and I don’t say a word to him, but I’m like, “Phil, I’m sorry.” It’s a whole different thing than anything I could have expected. They’re just so good that they inhabit these puppets and they become incredibly real, immediately.”

THE HAPPYTIME MURDERS – BRIAN HENSON INTERVIEWPlease follow me on Social Media Bonnie Laufer Krebs – Click here to subscribe https://www.youtube.com/user/moviegalz&hellip; Follow me on Twitter: http://www.twitter.com/movi_boni Follow me on Instagram: http://www.instagram.com/boneb Follow me on Facebook: https://www.facebook.com/BonsCelebInterviews/ An online source for movies and interviews Visit http://www.smartentertainmentgroup.com In the new "Puppet" comedy – The happytime Murders… In the seedy underbelly of Los Angeles, two clashing detectives — one human and the other a puppet — must work together to solve the brutal murders of former cast members of a beloved puppet TV show. Directed by Brian Henson – the son of the late famed puppeteer Jim Henson, who created the beloved children's television series The Muppet Show. Brian's new film The Happytime Murders draws on his father's legacy of puppeteering, but is aimed at an adult audience. The movie's tagline is "Sex. Murder. Puppets." Bonnie Laufer Krebs @movi_boni spoke with Brian Henson to talk about the film and why he wanted to make an R-rated puppet movie.2018-08-13T21:32:59.000Z

Director Brian Henson, the son of Muppets creator Jim Henson, also spoke about the challenges of making an adult-oriented comedy with puppets. “I feel like we’ve always been a little bit naughty. And the Henson Company is considered a very family friendly brand,” he told Slash Film. “At the same time, people go yeah, but they’re cool, they’re a little bit naughty. We’re not Disney. We’re not wholesome. In that sense. We are socially responsible hopefully. And but we’re kind of the cool and weird ones. And so this is us doing that.”

While the post-credits don’t hint at a sequel, screenwriter Todd Berger remains hopeful that he could return to these characters in the future. “At one point, we actually had a conversation about not just even a direct sequel to Happytime, but because we’ve now created this world, like the Happytime Cinematic Universe of a world in which puppets and humans coexist, what are other genres of stories we can tell,” he told Slash. “This is detective movie. This is a film noir buddy cop movie.”

This Friday, it’s up to them to find out who’s whacking off puppets. #HappytimeMurders – only in theaters. Get tickets now: link in bio.

“What are some others? Is there a horror movie set in this world and what does that look like?,” he continued. “Is there a western? At the time, Dee [Austin Roberston] and I even came up with an idea that we might be dusting off. Who knows? Kind of a gangster movie, like a Goodfellas type crime movie, full on gangsters with puppets in modern day. Maybe it’ll be an indirect sequel. Maybe it’ll be a direct sequel if people love the movie and it’ll be the further adventures of Phil Philips and Det. Connie Edwards.” 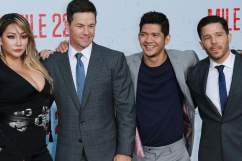 ‘Mile 22’ End Credits: Is There a Post-Credits Scene?