Tonight is the 2018 MTV Video Music Awards and there is a huge line up of performers ready to take over the VMAs stage. This year, there is no host of the VMAs because the show execs want to focus solely on the music. The VMAs executive producer, Bruce Gillmer, revealed to Bustle that, “This year we opted for a tighter show. We want to let the music do the talking a little bit more … We’re happy that we have all the music that we have. The music will speak for itself.”

In addition to the mainstream artists and A-list musicians taking the stage, there will also be several acts who are performing on the PUSH Artist Stage. According to USA Today, this stage is dedicated to rising artists in the industry, as a special treat. The PUSH artists tonight include Bazzi, Jessie Reyez, PrettyMuch, Hayley Kiyoko and Juice WRLD. Bazzi is actually performing twice tonight, as Bazzi is also performing during the VMAs pre-show. The Backstreet Boys and Bryce Vine are also performing during the red carpet arrivals.

This cosmic babe @bazzi is performing at the #VMA Red Carpet Pre-Show at 8p AND later on the PUSH Artist Stage. ❤️⭐️ Don’t miss it on @mtv | ? @shearerphoto

Cardi B has been reported to be opening up the VMAs, but TMZ has stated her opening will not include a musical performance. Perhaps Cardi B will be involved in a skit of some kind or a pre-taped segment. Cardi B is nominated in 10 categories tonight.

Jennifer Lopez is this year’s Michael Jackson Video Vanguard Award recipient. In turn, she will be putting on an energy-packed medley performance that she has been rehearsing for this past week. Expect classic JLo mixed with some of her newer music. This is Lopez’s first time performing on the VMAs stage since 2001.

Ariana Grande is another A-list performer set to take the stage, performing her latest song “God Is a Woman”. Shawn Mendes is expected to deliver a rendition of his song “In My Blood” and Panic! at the Disco will take the stage to sing their song “High Hopes.” Logic and Ryan Tedder are reportedly performing “One Day,” as the music video was just recently released, according to Billboard.

Nicki Minaj is reported to be performing from an iconic location in New York City for her set, which is rumored to include her songs “Barbie Dreams” and “Fefe”, as reported by Variety. The official statement about the performance reads that, “It will also be the first time a major awards show will televise a performance from the surprise location.”

More big news that just came out today was that Aerosmith will wow viewers by closing the show, according to Spin, and they are rumored to be performing their classic hit “Walk This Way”. TMZ first got wind of the performance after spotting the iconic band today, outside of Radio City Music Hall, where the 2018 VMAs are being held. And, according to The Blast, performer Post Malone may join them in the performance.

Get ready for a special performance from @aerosmith at the 2018 #VMAs on Monday at 9p ?❤️

MTV has reported that additional performers include Maluma and Travis Scott. Presently, Scott is gearing up to go on tour and Kylie Jenner, along with their baby, Stormi, is rumored to be joining him in the upcoming months. Billboard has also reported that there may be a tribute to Aretha Franklin included in the lineup at the VMAs. 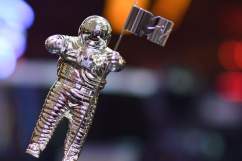 VMAs 2018 Host: Who Is Emceeing the MTV Video Music Awards?