Celebrity Big Brother UK premieres on August 15, 2018, at 9 p.m. local time via Channel 5, but, for those located in the US, there’s bad news. If you were asking, “Can I watch Celebrity Big Brother in the US?,” unfortunately, there is no way to watch the show online via a legal live stream. Clips may appear online and updates on the events and actions going on in the house will pop up online throughout the season. And, though you may not be able to watch the premiere, we do have information on who could be joining the cast this season, what the house is like for them, and additional details.

According to Channel 5, the official description of this season’s house reads, “Any celebrity wrapped up in a media storm needs a quick getaway from the pressures of the scrutiny and what better place to go than the sunny climes of California. The interior of the house is a paradise of tropical prints and Hollywood Regency flair. The exterior is reminiscent of a Palm Springs desert retreat where our celebrities can relax in a garden of cacti, succulents and a brightly colored mid-century modern design. But how long the celebs stay relaxed in this retreat is, as always, up to Big Brother …”

Channel 5A look inside the 2018 Celebrity Big Brother UK House

There have been rumors that Scott Disick has joined the cast of Celebrity Big Brother UK, but previously, The Sun reported that he had turned down the gig. Radio Times has reported that some of the rumored contestants on the show also include Meghan Markle’s half-sister, the Human Ken Doll, Kirstie Alley and Stormy Daniels. According to Daily Mail, porn star Daniels is on board for the show, right in the middle of her ongoing Donald Trump scandal. A source told The Sun that, when it comes to Daniels, “Stormy is the biggest signing for this year’s show and she’ll make headlines around the world.” And, the official Big Brother Twitter account seemed to hint at Daniels’ participating, tweeting this message, “A strong storm is coming from across the Atlantic … Who do you think it’s forecast to blow in?” Or, maybe the show was just referring to this season’s theme.

Celebrity Big Brother UK‘s theme for 2018 is “The Eye of the Storm.” So, look for the hashtag #CBBStorm on social media for updates, coverage, spoilers and additional details on the season.

Channel 5A look inside the 2018 Celebrity Big Brother UK House

Meghan Markle’s half-sister, Samantha Grant, as reported by Page Six, is joining the show as well. If Grant appears in the Celebrity Big Brother UK house, she is sure to get asked questions about her royal half-sister. The show’s creative director, Paul Osborne, dished to Variety about the new cast of celebrity houseguests, revealing that, “This year all the celebrity housemates have a unique shared experience. They’ve all weathered their own media storms.”

For the first time, in recent months, the United States has spun up its own Celebrity Big Brother, which was a success. So, there may definitely be future seasons in the works. Currently, CBS is in its 20th season of Big Brother, airing Wednesday, Thursday and Sunday nights. 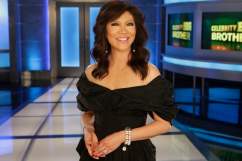 Read More
Big Brother, Reality TV, TV
Is Celebrity Big Brother UK 2018 online? Can I watch the show if I'm in the US? Who are the rumored cast members?