Fans of Gillian Flynn have been on the edge of their seats during the eight-episode miniseries Sharp Objects. The mystery will be revealed tonight, as the series comes to an end. The episode will air at 9 p.m. Eastern (8 p.m. Central.) If you don’t have cable or can’t get to a TV, you can still watch HBO live on your computer, phone or streaming device by signing up for one of the following cable-free, live-TV streaming services.

How to Stream ‘Sharp Objects’ for Free

Amazon Prime: If you have Amazon Prime or want to start a free 30-day trial of Amazon Prime, you can watch live HBO and all of HBO’s on-demand library through Amazon Channels. The HBO channel, which costs $14.99 per month, also comes with a free trial.

DirecTV Now: HBO is a $5 per month add-on that can be added to any of DirecTV Now’s four channel packages. You can add it to your existing DirecTV Now account, or if you’re a new subscriber, you can sign up for a free 7-day trial of any base package plus HBO. Additionally, new subscribers can get $25 off your first three months with promo code “YESNOW3”, so if you sign up for the “Live a Little” package plus HBO, you would get 60-plus channels, including HBO, for just $15 per month for the first three months.

Hulu: From now through the end of June, Hulu is offering a special deal that allows you to add HBO to “Hulu With Live TV” for just $4.99 per month. Once signed up, you can then watch Sharp Objects live or on-demand on your computer via the Hulu website, or on your phone, tablet or streaming device via the Hulu app.

HBO Now: If you’re in the United States and you don’t have a cable or satellite subscription that includes HBO, you can use the HBO NOW service to watch the season finale of Sharp Objects. It costs $14.99 a month but comes with a free trial. You can sign up on your computer or through a mobile or TV device, but signing up through a mobile device is easier. To find out if your specific mobile or TV device is supported, please visit the webpage here.

If you have a cable or satellite package that includes HBO, this section is for you. You can watch the season finale for free via HBO Go. It’s a streaming service that’s included with a regular HBO cable subscription. You’ll need your cable or satellite log-in information to access the service.

Some users have trouble sometimes using HBO Go (or even HBO Now) to stream, with the service not authenticating their log-in or hanging up at times.  If you experience problems tonight, check HBO Go’s Twitter feed for error reports. Or if you’re in the U.S. and have HBO as part of your cable subscription, you can write them at this link. For a big episode like tonight’s, if you’re wanting to watch live it might be good to have a backup option (like the ones listed above) ready and waiting, just in case.

The series had eight episodes total. This final episode is called “Milk.” The synopsis reads: “In the Season 1 finale, concerned for the safety of Amma, Camille puts her own life in jeopardy as she gets closer to the truth behind the shocking mysteries surrounding the Wind Gap killings…”

The series has been very dark and intense, which is why HBO has airead a PSA at the end of each episode about mental health. The PSA reads: “If you or someone you know struggles with self-harm or substance abuse, please seek help by contacting the Substance Abuse and Mental Health Services Administration (SAMHSA) 1-800-662-HELP (4357).”

Here’s a preview of tonight’s episode: 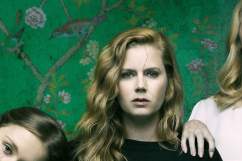 Where Was ‘Sharp Objects’ Filmed? Is Wind Gap, Missouri a Real Place?