The CW Damocles Part Two: How to Watch Online

Tonight is the Season 5 finale of The 100,  and it promises to be intense. Season 5 Episode 13, called “Damocles Part Two,” is not going to be easy to watch. We’ll find out if Kane survived (which seems unlikely), if Bellamy will ever forgive Clarke’s betrayal, and if Wonkru even has a chance after Clarke and Kane changed their minds a little too late. Meanwhile, Octavia barely survived after she was ready to sacrifice herself, and Bellamy seemed perfectly fine with that. The episode airs tonight at 8 p.m. Eastern/7 p.m. Central. Here’s how you can live stream the episode online tonight, or watch it online later tomorrow.

If you don’t have cable or can’t get to a TV, you can watch The CW on your computer, phone or other streaming device via one of the following over-the-top, cable-free, live-TV streaming services:

In addition to a Netflix-like on-demand streaming library, Hulu also offers a bundle of live TV channels, including the CW (live in most markets) . You can sign up for “Hulu with Live TV” right here, and you can then watch the show live on your computer via the Hulu website, or on your phone, tablet or streaming device via the Hulu app.

The CW (live in most markets) is included in the “Fubo Premier” channel package. You can sign up for a free 7-day trial right here, and you can then watch the show on your computer via the FuboTV website, or on your phone, tablet or streaming device via the FuboTV app.

The synopsis for tonight’s finale reads: “Clarke and her friends risk everything to fight one last battle for survival, only to glimpse an even darker threat to the last living valley on Earth.”

What do you think the darker threat could be? Here’s a trailer: 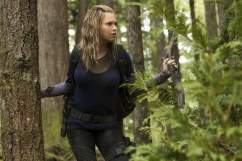 Read More
The 100, The CW, TV
Find out how to live stream The 100 Season 5 finale online tonight or how to watch it later online.