6LACK’s second studio album East Atlanta Love Letter is set to be released at 9 p.m. Pacific time on Thursday and midnight Eastern time on Friday. If that is too late for you to stay awake, you can stream and listen to it at your convenience.

Generally, albums become available around midnight EST on streaming platforms like Apple Music and Spotify. This was the case for 6LACK’s previous release, 2016’s Free 6LACK. On occasion, these platforms will throw a curveball at listeners.

‘East Atlanta Love Letter’ Will Come Out at Midnight EST

Take Kanye West’s June album ye for example. It was originally scheduled for release at midnight on June 1, but it wasn’t made available until the following afternoon. A similar thing happened with Drake’s double album Scorpion. While it was released at the proper time on Apple Music, the album wasn’t made available until 3 a.m. EST for Spotify users. 6LACK has teased the release of East Atlanta Love Letter since earlier this year.

In an interview with Highsnobiety, the rapper spoke about the difference between the new album and his debut. “Free 6LACK was about everything I’d been through up to that point; the follow-up is an update on what’s going on in my life right now,” he said. “In two years, things have gone from one side of the spectrum to another. Anything I’ve had to go through, or learn, has been crammed into them: from being a dad, to [ending and starting] new relationships, to becoming famous and figuring out my responsibilities.”

“It’s different. I feel like this record shows growth,” he added. “Free 6LACK is the only record I’ve ever dropped, so people don’t truly know who I am yet. I still have explaining to do. Being a dad and going through this all might’ve shifted the topic, but it hasn’t changed my mission. Now, I have new things to teach. I’ve got f*cked up situations I have to share because somebody out there is going through them too.”

6LACK, born Ricardo Valdez Valentine, recently shared the artwork and the tracklist for East Atlanta Love Letter on Instagram. The tracklist runs 14 tracks, and includes guest spots from the likes of Future, Migos’ Offset, Khalid and J. Cole. There is also a track called “Thugger’s Interlude” which references Young Thug, despite him not being listed as a feature. Some have speculated that Thugger will provide uncredited vocals. Check out the full tracklist below.

‪#EastAtlantaLoveLetter Album Tracklist ? thankful for everyone i got to work with on this one… preorder link in bio!

The rapper spoke on the excitement of being able to collaborate with others for the first time. “The last album was just me by myself – but this one’s got a few features. I’ve never wanted the label to find collaborators for me,” he explained.

“I just met people, we clicked, and made music together. If we didn’t? I kept it moving,” he added. “That’s how it should be instead of these ‘Can I get a verse?’, ‘Can I get a collab?’ conversations. So recently, I really clicked with J. Cole – and yeah, he’s on my new record.” 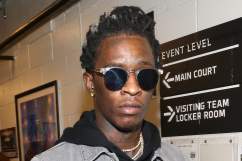 What Time Will Young Thug’s ‘On the Run’ Be Released?

Read More
apple music, Hip-Hop
Find out when 'East Atlanta Love Letter' will be made available to stream.