Season 5 of Bachelor in Paradise continues with episode 8 tonight. New cast members arrive, along with former cast members, and the drama continues to heat up in paradise. But, before we get into all the details on what happens on tonight’s episode, as well as other big spoilers for future episodes, this is your MAJOR SPOILER WARNING. Do NOT continue reading if you do not want to know about tonight’s episode or any upcoming episodes.

The official ABC synopsis for episode 8 reads, “An overconfident bachelorette is devastated when her man tells her that he can’t give her the future that she deserves. Everyone is shocked when they discover that this couple that seemed so stable has split up and split for the States, separately. Later, things shake up yet again with the arrival of two women at the same time, leading to two more couples threatened when the new ladies take off on a double date with previously spoken-for guys. As the men and their dates enjoy a fun-filled, romantic day on a private island, their ladies back in Paradise fear the worst for their relationships.”

The synopsis continues, “Just when all hope seems lost, Chris Harrison shows up with two beloved Bachelor alumni from seasons past who left Paradise twice, firmly hand-NOT-in-hand … Everyone is stunned when they walk down to the place where they first met, and the nervous young man asks his girlfriend to marry him … Everyone is thrilled for them except for one guy who is forced to watch his ex from The Bachelor Winter Games get engaged to another man. Seeing her man slip into a funk is scary for his new Paradise love, who would hate it if this affects their relationship. With the men handing out the roses, everyone thinks four women will be going home, until Chris Harrison provides another shock to the group with a last-minute arrival from New Zealand.”

This week, the men have the power to give out roses. Tune in to the ABC network or find instructions on how to watch Bachelor in Paradise season 5 online here to watch the show. Now, read on below for tonight’s show spoilers.

Ashley Iaconetti and Jared Haibon met on Bachelor in Paradise and dabbled in romance, but, ultimately, Haibon rejected Iaconetti. The two went on to become good friends, though Iaconetti continued to crush openly on Haibon. Iaconetti appeared on The Bachelor Winter Games, where she met Kevin Wendt, who is a current cast member on Bachelor in Paradise. It was assumed that Iaconetti gave up her virginity to Wendt and shortly after her break up with him, there was word that she got together with Haibon. Haibon reportedly realized what he had right under his nose for so long and quickly courted Iaconetti.

Within months, the two were engaged, as Haibon got down on one knee while filming Bachelor in Paradise. According to People, Wendt and Iaconetti’s relationship fizzled out in March 2018, while her relationship with Haibon was confirmed just two months later.

While the engagement gives hope to some cast members on the show, it rubs Wendt the wrong way, as he wasn’t to keen on seeing his ex get engaged. Wendt’s upset doesn’t have a great effect on the new relationship he’s started to build.

There Are Break Ups In Paradise With Solid Couples

This week, there are break ups and issues that arise in a couple of the relationships. It appears that Colton Underwood may have a change of heart once again. As he and Tia Booth have decided to really give dating a try, promo videos of this week show Booth hysterically crying. And, according to Reality Steve, the couple does not end up together by the time the finale comes around, so there’s a good chance that these two may be leaving the show separately this week.

According to ABC News, on the show tonight, Underwood states that, “I can’t sit around on a beach anymore and look at her every day and know there’s not a future. I don’t think my heart’s in it right now with Tia. I want her to be so happy and I want to be the one to make her happy but I’m not happy with it. I’m not feeling with it. It’s not right. I can’t continue to do this to her anymore.” Unfortunately, it looks like Booth will be blindsided by Underwood on the show again.

It seems that this week is when the solid couples start crumbling, as is the case with Eric Bigger and Angela Amezcua. According to previews of the show, Amezcua catches Bigger in a lie and is shown crying. Could this couple break up as well this week? Again, Reality Steve has reported that this couple does not end up together either this season.

With the power belonging to the men this week, things could get messy … especially when two more women show up in paradise. This means that four women could be going home this week if the numbers stay the same. The two women who show up are BIP vet Christen Whitney, aka scallop fingers, and Cassandra Ferguson. With all the men taken, these two, of course, bring men on dates, who are already technically spoken for by other girls.

Shushanna Mkrtychyan, who gets dubbed as a witch this season, is also in paradise this week. 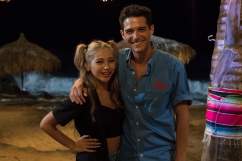