Getty BTS at an awards show.

It’s been a busy week for K-pop group BTS. After giving a performance at the United Nations on Monday and appearing on The Tonight Show with Jimmy Fallon last night, the group performed for the first time on Good Morning America.

The group’s Good Morning America performance was broadcast live on ABC Wednesday morning, as they performed their smash hit single “Idol.” Afterwards, they sat down to discuss their fame and the appreciation they have for their fans with Michael Strahan and Robin Roberts. “It’s all because of [the Army],” said group member RM. “We just practice hard, made our music to the best [of our ability]. We can’t pay [them] enough, but [the fans] send love and support and that’s how it happened. It’s all because of [the] Army.” Watch the full performance below.

“We thought that, you know, the most thing that especially the young generation needed is that true love begins, first begins with loving myself,” RM said of their music. “We thought that reminding [the] words of ‘Loving Yourself,’ it’s not rare these days, now, but I think just reminding these words to the world could have some meaning to the ARMY and ourselves. So we thought true love first begins with loving ourselves and we’re trying to love ourselves too, and I hope the ARMYs can do the same.”

BTS, also known as Bangtan Boys, is a K-pop band hailing from South Korea. The group was formed in 2013 and consists of seven different members: Jungkook, 21, V, 22, Jimin, 22, RM, 24, J-Hope, 24, Jin, 25 and Suga, 25. They are among the most popular musical acts in South Korea, and they officially crossed over to the U.S. with their 2017 album Love Yourself: Her, debuted at number seven on the Billboard 200 charts. Love Yourself: Her is the highest charting K-pop album in U.S. history.

Their 2018 Album Topped the Billboard 200 Charts

BTS also made history at the 2017 Billboard Music Awards, where they won the Top award. It was the first time a K-pop group won an award in the history of the BBMAs. The group’s second album, Love Yourself: Tear, was released on May 18 and peaked at number one on the Billboard 200 charts. Bolstered by the single “Fake Love,” it is the highest charting album by an Asian musical act.

During an interview with Billboard, the group articulated why their music has proven so popular around the world. “Honestly, from our standpoint, every day is stressful for our generation,” said RM. “It’s hard to get a job, it’s harder to attend college now more than ever. Adults need to create policies that can facilitate that overall social change. Right now, the privileged class, the upper class needs to change the way they think.”

And this isn’t just Korea, but the rest of the world,” adds Suga. “The reason why our music resonates with people around the world who are in their teens, 20s and 30s is because of these issues.” 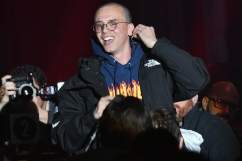