Colin Jost and girlfriend Scarlett Johansson have appeared together on SNL, as well as at the occasional Hollywood event, according to People. And, though they may walk down the red carpet together every now and then, there are no reports that they are walking down the aisle any time soon. As far as we know, they are not engaged, though Extra TV reported that Johnansson was spotted with a sparkler on her ring finger back in March 2018.

Even so, the couple has not confirmed anything.

The couple was first romantically linked in May 2017 and they appear to be going strong. Jost actually confirmed that he and Johansson were dating during a weekend update skit on Saturday Night Live. After Johansson reprised her impression of Ivanka Trump in the episode’s cold open, Jost broke the news live on the air.

When talking about Johansson to People, towards the beginning of the relationship, Jost said, “I’m very happy. I feel very lucky. She’s pretty cool … it’s hard to have a lot of complaints, she’s pretty awesome.”

According to Jost, the couple actually met on SNL, in the first place. Jost revealed that, “The first time she hosted was the first year I was a writer on the show. So, we’ve kind of known each other since then … she’s the best.”

Johansson was previously married to Ryan Reynolds and then to French journalist Romain Dauriac, with whom she has a young daughter. Johansson’s daughter is named Rose Dorothy.

E! News reported that Johansson previously had issues with monogamy, but pushed her doubts aside for Jost. Prior to dating Jost, Johansson told Playboy that, “With every gain there’s a loss, right? So that’s a loss. You have to choose a path. I think the idea of marriage is very romantic; it’s a beautiful idea, and the practice of it can be a very beautiful thing. I don’t think it’s natural to be a monogamous person. I might be skewered for that, but I think it’s work. It’s a lot of work.”

But, when Johansson got into a relationship with Jost, a source told E!, “Scarlett says he is different than many of the men she has been with.” And, another source said, at the time, “She seems like she found a good guy. Scarlett is more into personality than anything when it comes to men. Colin makes her laugh. She seems really into Colin.”

According to Romper, Colin Jost has changed a bit since starting to date Johansson. At least, that’s what his SNL co-star Michael Che says. Che said that his buddy ditches him, when he wants to go out. Then again, Che also admitted to not asking his friend to hang out with him as much. Che joked, “Well, yeah, because you’re with Scarlett Johansson. I don’t want to tell you to come to this dive bar with me and watch a Yankee game. I feel like maybe you have better things to do now.”

Jost, who is three years younger than Johansson, has never been married. 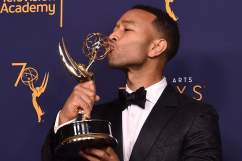 Emmys 2018 Live Stream: How to Watch the Awards Show Online