It appears that Machine Gun Kelly isn’t the only rapper who has a problem with Eminem. After Em dropped an MGK diss track titled “Killshot” with references to other celebrities, Iggy Azalea hopped on Twitter call him out for being lazy.

The line that Azalea responded to saw Eminem insulting both her and MGK’s status in the industry. “You ain’t never made a list next to no Biggie, no Jay / Next to Taylor Swift, and that Iggy ho, you about to really blow.”

“Diss songs shouldn’t be filled with celebrity name drops to pad out lazy bars,” she wrote. “And that’s my unbiased opinion from a girl that watched this [sic] guys set and sung the words in the crowd. I’d think it regardless. One of the greatest to do it, I’m NOT in dispute about that. But I do think the name dropping thing has become a [crutch].”

She Claims That Eminem Is Losing His Creativity

Also let’s talk about why it’s lazy now; but wasn’t in the earlier work.
The earlier stuff was crazy, twisted and creative.
This stuff feels more like picking names that fit easily into a rhyme scheme. ?‍♀️

Azalea didn’t stop there, and proceeded to break down why she felt Eminem’s references to the likes of Rihanna, Diddy, and Azalea herself to be lazy. “So let’s talk about why it’s lazy now; but wasn’t in the earlier work,” she tweeted. “The earlier stuff was crazy, twisted and creative.
This stuff feels more like picking names that fit easily into a rhyme scheme.”

Sensing that her stance would incite backlash on Twitter, Azalea included a disclaimer at the end of her rant. “I am beyond prepared to be trolled for this opinion. Hahahahaha.”

She was right. Eminem fans have wasted little time getting on Azalea for being out of her depth as a rapper. “Iggy Azalea really about to have another 5 minutes of fame complaining that Em mentioned her,” claimed one user. “Girl your entire career is made of lazy bars,” wrote another.

Others slighted both rappers, saying that the “Killshot” track was so underwhelming that someone of Azalea’s caliber had to be the one to say something about. “Damn you know sh*t was weak when even Iggy Azalea tells u to step it up,” one of them wrote. Check out some of the best Twitter reactions and memes below.

Iggy Azalea just said that Eminem has lazy bars on #KILLSHOT
Let’s just think about that for a second… pic.twitter.com/D6VR8xoIgs

wait didn't you try to go on sway with some WACK ass freestyle and some dude called in telling you to stop rapping….is that the freestyle em's talking bout when he says i wouldnt dare re-air it but i could be wrong even though i may be right pic.twitter.com/0ZwyWfZtRA

Iggy Azalea hearing her name on this new Eminem "Killshot" song and is like; pic.twitter.com/rHSMG7Atpq

Eminem Previously Dissed Her on the 2014 Song ‘Vegas’

This isn’t the first time that Eminem has taken swipes at Azalea. On a 2014 track titled “Vegas,” Eminem applauds Nicki Minaj and says that Azalea, her competitor at the time, is a weak artist.

Eminem’s verse caused controversy due to the allusion to rape in the final bar. Azalea responded to the verse on Twitter, writing: “I’m bored of the old men threatening young women as entertainment trend and much more interested in the young women getting $ trend.”

“It’s especially awkward,” she added, “because my 14 year old brother is the biggest Eminem fan and now the artist he admired says he wants to rape me. Nice!”

its especially akward because my 14 year old brother is the biggest eminem fan and now the artist he admired says he wants to rape me. nice! 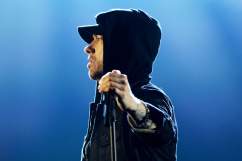