Getty The cast during a press conference.

Iron Fist returns for its second season on Friday. The Netflix series has earned noticeably higher marks than it did the first time around, and, coming off the heels of The Defenders and Jessica Jones‘ second season, it will continue to flesh out the Marvel Television Universe.

Iron Fist has plenty of returning characters, like the titular hero, played by Finn Jones, and his girlfriend Colleen Wing, played by Jessica Henwick, but there are also some exciting newcomers. Typhoid Mary makes her small screen debut as Iron Fist’s adversary, and she will be played by British actress Alice Eve. Read on to learn more about the cast.

In addition the MCU, Jones has appeared as Loras Tyrell on the HBO series Game of Thrones and as Julian Bell on the BBC miniseries Life In Squares. His film roles include the second lead in The Last Showing and a clueless deputy in Leatherface, the eighth film in the Texas Chainsaw Massacre franchise.

#RIPinterviewmagazine #AndyWarhol Feel lucky I got to be a part of it ?

Jessia Henwick is an English actress. She rose to fame as Colleen Wing on the first season of Iron Fist, and reprised her role on season one of The Defenders and season two of Luke Cage.

Beyond the MCU, Henwick is best known for her role as Nymeria Sand in HBO’s Game of Thrones and X-wing pilot Jessika Pava in Star Wars: The Force Awakens. She is set to appear in the upcoming thriller Underwater opposite Kristen Stewart and T.J. Miller.

Alice Eve is a British actress. She will be making her MCU debut as Typhoid Mary, and has been said to be the main antagonist of season two. Eve is no stranger to big franchises, having played Young Agent O in Men In Black 3 and Dr. Carol Marcus in Star Trek: Into Darkness.

Eve has also appeared on shows like Entourage, Black Mirror and Robot Chicken. She will appear in the upcoming science fiction film Replicas opposite Keanu Reeves and John Ortiz.

Some new pics! @nathanjohnsonny taking the photos and @mikeystyles dressing me up. These guys are top notch… took an experience I usually loathe and made it fun… and I got some really great pics.

Tom Pelphrey is an American actor. He originated the role of Ward Meachum in season one of Iron Fist, and also appeared on popular shows like CSI: Miami, The Good Wife and The Following.

In addition to his television career, Pelphrey has appeared in the film Junction opposite David Zayas and Michael O’Keefe, and the crime film The Girl Is In Trouble opposite Wilmer Valderrama and Columbus Short.

Sacha Dhawan is a British actor. He originated the role of Davos on season one of Iron Fist, and has also appeared on popular television shows like Outsourced, 24: Live Another Day and Sherlock.

Beyond his television career, Dhawan has acted in films like The Mystery of Edwin Drood opposite Matthew Rhys and Rory Kinnear, and After Earth opposite Will and Jaden Smith. 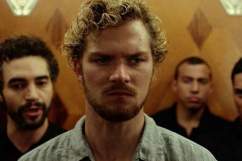 What Time Does ‘Iron Fist’ Season 2 Become Available on Netflix?