Eminem continues to stoke the flames with his latest release Kamikaze, where he dissed dozens of fellow emcees. Machine Gun Kelly fired back on Monday with a diss track titled “Rap Devil,” but now, a peer and former label mate of Eminem’s, Joe Budden, has decided to respond.

Budden aired out his grievances toward Eminem on the Joe Budden Podcast on Wednesday. “Since you’ve been in this megastar cocoon. That’s what happens to the megastars, y’all stay in cocoons,” Budden said. “You popped off quick. They sheltered you your whole f*cking career. Who was selling records like that? You f*cking superstar n**gas been sheltered and bored.”

Budden further rubbed salt in the wound by saying that one of Em’s other enemies, Machine Gun Kelly, was correct in saying that he was washed up. “Machine Gun Kelly was right,” Budden snapped. “Y’all been slaves to your own superstardom.” You can listen to the full episode above.

Per usual, Twitter has had a field day with Budden’s comments, particularly when he claimed that he’s been a better rapper than Eminem. “Let me tell you what Joe Budden has thought this entire time. I’ve been better than you this entire f*cking decade!” Memes and gifs have sprouted up in response to Budden’s brazen claims.

You thinking Joe was obliterated by Eminem is craaaaaaaaaazy. Eminem releasing an album on Joe Buddens birthday trying to diss Joe in the first track during a time when Joe is mad popular says it all..Em is trying to ride shot gun on the Joe Budden bandwagon pic.twitter.com/snsnWNTq2M

Joe Budden whenever he sees an opportunity to diss someone. pic.twitter.com/2LXluNrxim

How you look listening to joe budden and eminem trade diss tracks in 2018 pic.twitter.com/qSqKRyRnVK

this meme is only great cause joe budden would absolutely punch his computer if he saw this pic.twitter.com/A3zVvoKWib

Some fans were quick to agree with Budden’s claims, particularly when it came to the quality of Eminem’s recent albums. Other felt that Budden, a veteran rapper, was taking the easy way out by not putting out a track and simply criticizing Em on his podcast.

“So Joe Budden is this great of a rapper,” wrote one user, “a lowkey king lyricists when it comes to going up against Eminem but where were these high praises for Joe when he was throwing out diss song after diss song against Drake and meek? Y’all canceled that man immediately.”

Another wrote: “Let Joe Budden go into the studio and release a diss record to Eminem. Not go off on him on Episode 177 of his podcast, weak.” Check out additional reactions below.

Yo I kinda want Eminem to diss Joe Budden exclusively so we can get this diss record. A Joe Budden vs. Eminem rap beef… my messy petty ass is here for it pic.twitter.com/kdk9xN6YoP

Joe Budden Responds to Eminem Diss: ‘I’ve Been Better Than You This Entire Fu*king Decade’… pic.twitter.com/YJZ5GTr4hN

Let Joe Budden go into the studio and release a diss record to Eminem. Not go off on him on Episode 177 of his podcast, weak.

“Joe Budden, a rapper who has a flawless record of GREAT diss records, is talking on a PODCAST about how he’s better than a guy who is DISSING him on a record, instead of RAPPING. This is 2018”

Budden later teased the possibility of releasing a diss record, but that Eminem would have to improve his game first. “You inspire me the way my harsh criticism inspired you. You go spit something to make the superior MC, me, get out of his bed,” he explained. “In the event you want to address me, you’ll do it outside of your album roll out. The second you do it, I’m on your a*s. I am going to cut your f*cking a*s up.”

“You gotta say something,” Budden added. “You have not said anything for the better part of a whole f*cking decade. How could I be mesmerized by someone I thought I was better than? You don’t think it’s odd that you’ve said my name more as adversaries more than when I was there.”

All this comes on the heels of the Eminem track “Fall,” where he sends a blatant diss at Budden for criticizing his last album Revival. “Somebody tell Budden before I snap, he better fasten it,” Em raps. “Or have his body bag get zipped / The closest thing he’s had to hits is smackin’ b*tches.” Budden called Eminem a hypocrite due to the fact that he has also dealt with domestic abuse charges in the past, and that his diss wasn’t worth “getting out of bed for.”

Some fans have been quick to point out that, while Budden dismissed the diss, he talked about it for over an hour on his podcast.

If Joe Budden is gonna make those claims about being better than Em over the past decade, he has to come out of “retirement” and drop a diss track.

Joe Budden spent an hour on a podcast—not an album—telling us why Eminem’s diss isn’t worth getting out of bed for. AN HOUR. pic.twitter.com/7qEjhHFVaS

Joe Budden got dissed and responded by crying on his lil podcast ???? But when Drake clowned him on No Shopping, he responded within 24 hrs with a 20 minute long diss ??‍♂️ 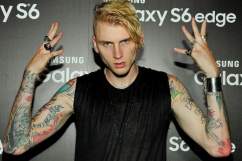