Lil Wayne drew the ire of the internet last week when his album Tha Carter V didn’t come out on its anticipated release date. Longtime fans took to Twitter and Instagram to voice their disappointment, which Wayne and his Young Money camp failed to address publicly. Until today.

On Tuesday afternoon, Wayne hopped on Twitter to announce that he would be making an announcement at 5 p.m. The current belief among fans is that the rapper will provide an update on the status of Tha Carter V and whether or not fans should expect to hear it anytime soon. Check out the tweet below.

Wayne followed through on his word, and released a YouTube video where he announced that Tha Carter V will be out on September 27, which is his 35th birthday. The rapper stated that a pre-order has been offered on the his website alongside physical versions of the album. Check out the video announcement below.

Wayne is no stranger to delays and album setbacks. Tha Carter V has been on the shelf for years, and when the album missed its initial release date of December 2014, Wayne put out the mixtape Sorry 4 the Wait 2 as a condolence prize for the fans.

In February 2015, Wayne followed up Sorry 4 the Wait 2 with the Free Weezy Album. The album was an official studio release on Jay-Z’s streaming service Tidal, and allowed the rapper to take shots at his Cash Money boss Birdman and the legal issues that he was dealing with at the time.

The Album Will Coincide With His 35th Birthday

In a 2017 interview with XXL Magazine, Wayne spoke on the importance of Tha Carter V, and what it means to him to put the album out as he sees fit. “Of course you’re going to see Tha Carter V. I just don’t want to put it out the wrong way,” he explained. “Honestly, I can do what I want at any time. The fans deserve it to be right and that’s how it’s gonna be. I’ma make sure it’s right. I can drop whatever I want to drop. That’s why I keep dropping whatever I want to drop. But I’m not gonna give them Carter V the wrong way.”

“Carter V is done. It’s on the shelf, just ready to drop,” he added. “I ain’t gotta do that. I move on and keep it moving and give them what I’m doing right now. Carter V is ready to be listened to. It’s just gotta be listened to the right way and like I said, I’m not gonna give it to them wrong.”

There was an ongoing theory that Tha Carter V will drop on September 28, as has been hinted at by the countdown tags that athletes like Kobe Bryant, Michael Vick, and James Harden have been posting on Instagram. 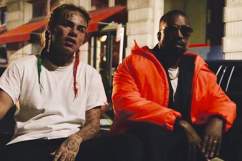