Reginae Carter is a recording artist and the oldest daughter of rapper Lil Wayne. She is set to appear on Wayne’s highly-anticipated album Tha Carter V, and has been teasing the album’s release on her Instagram.

Reginae, 19, has been a vocal supporter of Wayne’s career, and she’s quickly becoming a celebrity in her own right, appearing on reality television shows and being romantically linked to other rappers. Read on to learn more about Carter and his relationship with her legendary father.

Reginae was born on November 29, 1998. Her father, Lil Wayne, was only 16 at the time, and her mother, Antonia ‘Toya’ Wright (nee Johnson), was only 15. The couple would eventually get married on Valentine’s Day 2004, but conflicting lifestyles, and the alleged affairs that Wayne was having while on the road, left to their divorce two years later.

Despite their divorce, Wayne and Toya have stayed close over the years and raised their daughter together. In an interview with Essence, Toya spoke on the importance of her relationship with the rapper.

“I’m his friend and I’ve been in his life since we were like 13 years old. That’s what people don’t understand, it’s bigger than us being together,” she said. “I look at him like family. I’ll always have his back, I’ll always go to bat [for him] because I’m like a real loyal person that’s just who I am and the way I was raised. That’s my daughter’s father and that’s my friend. That’s just the relationship we have.”

Reginae remains close with her mother and her new baby sister Reign Ryan Rushing. Toya and Atlanta businessman Ryan ‘Red’ Rushing welcomed Reign into the world on February 8, 2018, and the baby has graced several of her older sister’s posts. The most recent was on September 9, which Reginae captioned: “Family time.” 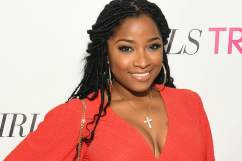 2. She Was a Main Cast Member on ‘Growing Up Hip Hop: Atlanta’

Reginae first gained attention when she was cast on the WE TV series Growing Up Hip Hop: Atlanta. The series focused on the children of famous Southern rappers and their turbulent lifestyles, and saw Reginae interact with the likes of Bow Wow, Shaniah Mauldin, the daughter of Jermaine Dupri, and Zonnique Pullins, the daughter of Tiny Cottle and stepdaughter of T.I.

Reginae quickly gained a reputation for “whiney” and “entitled” on Growing Up Hip Hop, a reputation that she grew to detest. Her mother Toya was similarly frustrated by this, as she took on Twitter on January 18 to let off some steam. “I’m sick of y’all making my baby look like a f*cking Brat!! #GUHHATL,” she wrote. “This is not what happened at this dinner. I’m so sick of this sh*t. I was giving y’all a chance to get it right. Enough is enough! #GUHHATL.” In the midst of Toya’s Twitter rant, she announced that both she and Reginae would not be returning for the next season.

Please don’t call us to come back. We done! #GUHHATL

In a 2017 interview with BET, Reginae spoke on the appeal of stardom and growing up with celebrity parents. “In middle school and high school, I mean I’ve always been like the popular kid,” she said. “Like everybody always knew like ‘Oh she’s Lil Wayne’s daughter, she’s Toya’s daughter blah blah.’ So they’ve always did the most, so I never really got bullied or anything. My father was already a star when I was born, so I was raised into this and that’s what people don’t understand.

“I never was scared of cameras,” she added. “I always loved cameras, so yeah I like that attention.” 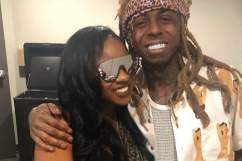 Reginae began dating Atlanta rapper YFN Lucci in 2017, but the couple didn’t make it public until March 25 of this year, when they posed for photos at the former’s “grown up” prom. Reginae wrote “Prom King and Queen” on one of the posts that saw them walking in crowns. On June 1, the couple made headlines again when they were arrested in Knoxville, Tennessee.

The two were allegedly arrested outside of an after hours club. In a video taken by a bystander, Lucci can be seen leaning on the hood of a police car and talking to an officer. Reginae can’t be seen in any of the videos, but several witnesses confirmed that she was arrested as well. The following morning, Lucci tweeted that everything was okay, and that they were not taken down to the police station. Reginae did likewise on her Snapchat, writing: “I’m okay guys. I’m not in jail btw.”

#PressPlay : More footage of the alleged arrest of #YFNLucci and #Reginae – We can’t confirm they went to jail but many eye witnesses are claiming they got handcuffed after an after hours in #Tennessee #knoxville

After Lucci was caught partying with strippers in July, several outlets speculated as to whether he had split from Reginae. Lucci deleted all photos of her on his profile and they have not been seen together since. That said, neither have stated that their relationship is over, and afterwards, Reginae was seen wearing a YFN Lucci chain on Instagram. Celebrity Insider reports that Reginae split from Lucci after he got a stripper pregnant, but these claims have not been substantiated. 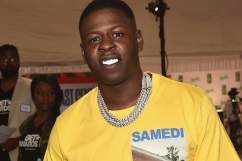 Reginae started off her music career as a member of the group OMG. The group debuted on a 2009 episode of Tiny and Toya, and have also performed on BET’s T.I. and Tiny: The Family Hustle. While they never released a studio album, they did put out the pop singles “Can’t Stop Loving You”, “Where the Boys At”, and “Gucci This (Gucci That).” Reginae left the group in 2010 to pursue a solo career, and in 2013, it was announced that she had signed a deal with Wayne’s record label Young Money.

According to lilwaynehq, Young Money president Mack Maine called Reginae a “mega superstar” and said that listeners should “expect greatness” from her. She released her first solo single, “Mind Goin Crazy” in 2014. She’s currently working on her debut album.

Happy Father’s Day daddy❤️ Thank you for everything you do for me . I truly appreciate that . You showed me that no matter how busy you may be , you can always make time for your loved ones . You’re always busy but still seem to make time for all your kids . That’s excellence ✨ love you so much . Enjoy your day because you truly deserve this Day of honor ❤️. #Thegoat

Reginae talked to HollywoodLife about her relationship with her father. “Growing up with my father being Lil Wayne and mom being Toya Wright, my life is just lit,” she said. “My dad’s a great dad. We have the best relationship. Being a celebrity kid definitely has its perks. Just walking in the house and seeing Drake or seeing Nicki [Minaj] is something that’s normal to me.” 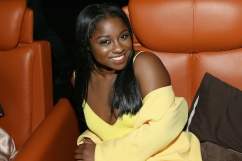 Reginae is set to contribute vocals to Wayne’s long-anticipated Tha Carter V. The track she’s rumored to appear on is called “Famous,” which was first previewed as a snippet this year and features her talking during the intro. Reginae teased her involvement on Twitter, where she reposted the album’s tracklist with the caption: “Look what we have here.”

Reginae has also teased Tha Carter V on Instagram. She posted an image of a large red “V” on September 21, joining the likes of Floyd Mayweather, James Harden, Michael Vick and Kobe Bryant. After Wayne’s lawsuit with Cash Money Records was resolved in June, she took to social media to voice her excitement. “The GOAT,” she wrote, with a photo of Wayne leaning against stacks of money. 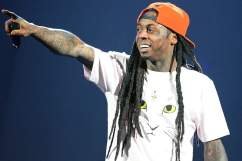