Lil Wayne has dominated the news cycle over the past few weeks due to the rollout of his album Tha Carter V. Much has been made of the album’s multiple delays and rumored tracklist, but the attention that Wayne has gotten has also spilled over into his personal life. Many fans are curious as to whether the New Orleans rapper is dating anyone at the moment.

Wayne is currently in a relationship with Dhea Sodano. The two have been together since 2011, and despite rumors of Wayne dating other women and prison stints over the years, they are reportedly engaged. Read on to learn more about Sodano and her life with the rapper.

Sodano Vacationed In Miami With Lil Wayne In May 2011

Sodano is of Italian descent and hails from Scottsdale, Arizona. According to Complex, she worked as a waitress at the Suede Restaurant & Lounge before she met Lil Wayne. The couple were first spotted in Miami in May 2011, and quickly became inseparable. There were even reports that the rapper was engaged to Sodano less than a year after they started dating.

On Valentine’s Day 2012, Wayne tweeted: “She Said Yes!”, which caused his fans to believe that he had proposed to Sodano. He later came out and claimed that Sodano had accepted his invitation to be his Valentine, writing: “I meant ‘she said yes’ to being my valentine! Y’all krazy!” Despite the retraction, reports surrounding their engagement persisted, especially after Sodano was photographed wearing a large ring at a Lakers game.

Ohhhhhhh now I see why!
I meant "she said yes" to being my valentine!!! Hahahahahahaha! Y'all krazy!

On a 2013 episode of MTV’s The Show With Vinny, Wayne seemed to confirm his engagement to Sodano. During the episode, Wayne sits down with star Vinny Guadagnino and his family over an Italian dinner. Vinny asks Wayne if he eats Italian food, and the rapper responded by saying, “My fiancée is Italian.”

Sodano has posted several photos of her and Wayne on her Instagram account, which is set to private. In 2014, she accompanied the rapper to his daughter Reginae’s sweet sixteen party, and two years later, she was photographed celebrating his 34th birthday. According to lilwaynehq, Sodano was with the rapper when he blew out the candles to his cake, along with Young Money affiliates Lil Twist and Gudda Gudda. Check out a photo from the celebration below.

Wayne was involved in a high profile romance with singer Christina Milian between the years 2014-15. This raised many eyebrows at the time, as he was still believed to be in a relationship with Sodano. Due to the private nature of their relationship, it was unclear whether they split up or merely took a break during this period. After Wayne and Milian broke things off, the latter said that she’s “never loved anyone” the way she loved Wayne, and that she’s “never had anyone understand” her the way he did.

In 2018, Sodano broke the silence on her relationship with Wayne, and posted a photo of the two of them on Instagram with the caption: “Seven years and counting…. THROWBACK,” referring to how long they’ve been together. The post confused fans even further, and they flooded the comment section with questions about the status of their relationship. “Wasn’t he with Christina Milian? I’m so confused,” wrote one user. Another pointed out that if Wayne and Sodano broke up at any point, than it is not technically a seven year anniversary.

Sodano responded to the comment, writing: “We were never apart babe… Everyone just wants to assume sh*t and think they know what actually goes down… but they only know what social media portrays.”

“You guys act like you’ve never been through sh*t with your man??,” she added in a separate response. “Like if I ain’t trippin on it why are you?? Sh*t is old news.” Sodano’s Instagram account is set to private, but you can check out screenshots of the exchange above. 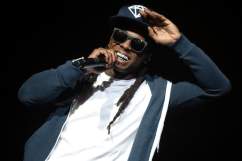