Michael Strahan is one of the most recognizable faces in television broadcasting. As the host of multiple programs, including his upcoming talkshow, GMA Day with Sarah Haines, the 46-year-old former NFL player has become a household name.

And while his professional life is something that many Strahan fans know well, his personal life is kept a bit more under wraps. What do we know about Strahan’s four children? How old are they, and what does Strahan have to say about being a father?

1. He Shares Two Children with His First Wife

2. He Has Twin Daughters with His Second Wife

Strahan has twin daughters with his second wife, Jean Muggli. Their names are Sophia and Isabella Strahan; the girls are 14.

The girls split their time between North Carolina and South Dakota.

Strahan tells People, “The twins live a crazy life. One time they flew out to D.C. and interviewed the First Lady for GMA… Then the next day their mom was sending me a video of them riding horses and splashing around in a muddy corn field.”

According to Complex.com, his divorce from Muggli resulted in a settlement of $15 million with $180,000 in child support.

3. He Says His Kids ‘Give Him Strength’

Always so much fun with my 2 youngest girls (not so young anymore ??) @nickelodeon’s #KidsChoiceSports. Tonight at 8/7c! #SMAC

In an interview with People, Strahan said that his kids “give him strength.”

“I love being with the kids. To me it’s all about family, now more than anything,” he shares with the outlet.

Strahan’s marriage to Muggli, which ended after seven years, resulted in a highly contentious divorce.

4. His Four Children Are Close Despite Being Raised Apart

After Strahan and his first wife separated, Michael and Tanita remained in Germany with Hutchins.

He tells People, “I think a lot of times when you split, people assume that the mother is supposed to take responsibility for the kids. But from day one, it was very important for me to be active, to be a part of their life… I was constantly on planes and phones. And it’s very hard – of course it’s hard with them being in Germany. But one thing I learned is, you make time for what you want to make time for.”

5. His Oldest Daughter Has a Degree from the Fashion Institute of Design and Merchandising in Los Angeles

Strahan’s oldest daughter, Tanita, has a degree from the Institute of Design and Merchandising in LA.

Michael, meanwhile, is earning his degree in psychology. 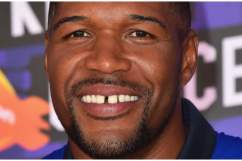 Michael Strahan Net Worth 2018: 5 Fast Facts You Need to Know