L ogic will release his long-anticipated album Young Sinatra IV on Friday. The album will be the latest in the rapper’s Young Sinatra series, and was prefaced by the promotional singles “Everybody Dies” and “One Day” featuring Ryan Tedder.

How to Stream & Listen to Logic’s New Album

Young Sinatra IV, Logic’s fourth studio album and second release of the year following the Bobby Tarantino II mixtape, will be made available on a number of different streaming platforms at 9 p.m. Pacific time on Thursday or midnight Eastern time on Friday. We’ve listed the different platforms that the album will be released on, and the ways in which you can listen to them below.

You will be able to stream Logic’s album on iTunes and Apple Music. If you have an Apple Music account, you can go into the app on your phone or tablet and set the notifications to alert you when the album is out. Click here to learn how.

Based on the standard release schedule for Spotify, Young Sinatra IV will also be available to stream. If you don’t have a Spotify account, you can sign up for one here and pay only $0.99 for the first three months.

Young Sinatra IV will also be available to listen to on Tidal. The streaming service offers a free 30-day trial with Tidal Premium, which provides  access to music videos and curated playlists.

Logic announced Young Sinatra IV with the “YSIV” freestyle on August 28. It will be the first installment in Logic’s popular series since 2012’s Young Sinatra: Undeniable. The album will include fourteen tracks and guest features from Wale, Hailee Steinfeld, Jaden Smith, and all the living members of the Wu-Tang Clan. For snippets of key tracks, check out the link below.

The rapper recently appeared on Hard Knock TV, where he discussed the importance of returning to the Young Sinatra title. “I think it’s dope because as a commercial, now mainstream artist, I feel very proud in knowing that like, I’m dropping a boom-bap hip-hop album. There’s not really too many people doing that but especially this way, like very ’90s.”

“It makes me really happy and I’m proud to do it,” he added. “The reason why this album is special and the people love it and what I’ve released is because I’ve made them wait for it. Because if I did boom-bap album after boom-bap album it’d be the same sh*t.” He went on to say that there are numerous references to the original Young Sinatra trilogy throughout the album. 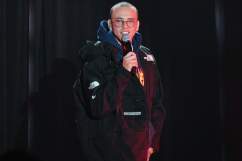 What Time Will Logic’s ‘Young Sinatra IV’ Be Released?