For weeks, fans have speculated and wondered who would be the next new star of The Bachelor 2019. This morning, Good Morning America revealed the lucky guy and we have the star’s identity, along with some behind-the-scenes info on him below.

Prior to this morning’s reveal, it was first rumored that Jason Tartick or Blake Horstmann could be the new star. Then, on September 3, 2018, there were rumors that Colton Underwood was the network’s pick. And, that same night, Underwood was shown breaking things off with Tia Booth on the dating show Bachelor in Paradise. His reason for breaking off the courtship was that he didn’t feel the connection was right and he wanted to find love.

Well, Reality Steve previously reported that Underwood will definitely be on a search for love this coming January, as the new star of The Bachelor and it was confirmed on GMA. This is sure to get an uproar from some fans on social media, who felt that Underwood was using Booth and was wishy washy with his feelings. But, the official announcement of the new Bachelor wasn’t until the morning of September 4, 2018.

During the announcement, GMA talked about Underwood’s journey on The Bachelorette and through Bachelor in Paradise. Underwood sat down with Michael Strahan and said he’s “very excited” about the opportunity, hoping for “three times a charm” in this situation. Underwood also said that he and Booth have remained friends since their break up. He then talked about his ideal woman, saying she has to have a passion of some kind. He also said that he is serious about getting engaged at the end of his Bachelor journey.

After Underwood’s break up with Booth on BIP5, he took to Instagram, writing a goodbye message to Booth. Underwood wrote, “Thank you for teaching me even more about myself, and most importantly, for your friendship that I know will continue far beyond Paradise. Don’t settle for anything less than the world, because that’s what you deserve. Can’t wait to see what the future has in store for you and catch up on life some day, preferably over a hot dog dinner.” Previously on the show, Booth’s friend, Raven Gates, warned her against continuing a romance with Underwood, fearing that he was on the show for the wrong reasons. Gates also said that Underwood is always looking for the next best thing and that Booth was the “it girl” of the franchise when he first reached out to her.

Blogger Reality Steve has also said that he thinks Underwood is not on the show for the right reasons. Well, whatever his reasons are, they aren’t to sleep with multiple women on the show like Bachelor stars of the past, since Underwood claims to be a virgin. This makes Underwood the first ever virgin star of the show.

When Booth was asked what she thought about Underwood being the next star of The Bachelor, Entertainment Tonight reported that she said, “I don’t know that he’s ready. I don’t. I mean, it was just about two months ago that I was telling him that he really needs to figure himself out before he can fully be with someone else. If there’s a chance that Colton is the Bachelor, I would hope that he is fully ready for that experience knowing that he wants to be engaged at the end of it.”

Host Chris Harrison also commented on the possibility of Underwood becoming the next Bachelor, prior to the reveal. He told ET Online that Underwood was basically a perfect candidate, explaining that, “If he’s single, Colton would be a very interesting Bachelor. We look at a lot of things when picking the Bachelor, and good TV and good story is a lot of it. Colton has all that in spades. There’s the, ‘Is he ready for this?’ angle with Tia, and is that still hanging over him? … Then there’s the virgin angle … If he’s willing to put that on display as the Bachelor, I would find that fascinating in this day and age … I think it would be a fascinating story. And that’s a lot of what makes a good Bachelor.”

The new season of The Bachelor will not premiere until January 2019. 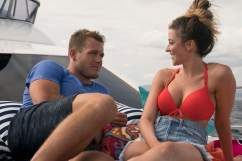 What Happens With Tia Booth & Colton Underwood on BIP 5 Tonight?