Tia Booth and Colton Underwood have been one of the more dramatic couples to watch on Bachelor in Paradise this season. For those who need to be brought up to speed, Underwood briefly dated Booth before he went on The Bachelorette 2018. He admitted to Bachelorette star Becca Kufrin that he had dated her friend, former Bachelor co-star, Booth. In addition, Booth appeared on the show, early in the season, to let Kufrin know that there was nothing between Underwood and herself, giving her the go-ahead to date him.

When the hometown dates came around, Kufrin still had Underwood in the mix and he professed his love for Kufrin. But, Booth showed up again and revealed to Kufrin that she regretted telling her it was okay to date Underwood. Booth said she still had feelings for him. Ultimately, Underwood was eliminated that episode, but Kufrin said Booth’s admission wasn’t the primary reason for her split decision.

Flash forward to Bachelor in Paradise, Booth arrived, hoping to see Underwood in paradise so they could rekindle some kind of romance. Underwood had not yet arrived, so Booth decided to take cast member Chris Randone on a date. Sparks flew, but then Underwood appeared on the scene. Underwood avoided initially talking to Booth, but ended up asking her out on a date. The two seemed to sort through their issues together and their romance heated back up. But, Underwood was indecisive and wanted to explore his options, until he ultimately decided he wanted to give love a shot with Booth.

The couple was fortunate to get another date in paradise together and they were met by Booth’s BFF, former BIP cast member Raven Gates and her boyfriend, Adam Gottschalk, who she ended up with on the previous season of the show. When Gates got some alone time with Booth, she cried, saying she worried about Underwood’s true intentions. Booth, though she took her friend’s concerns to heart, decided to carry on with the relationship.

According to ABC News, on episode 8, which airs tonight, Underwood says, “I can’t sit around on a beach anymore and look at her every day and know there’s not a future. I don’t think my heart’s in it right now with Tia. I want her to be so happy and I want to be the one to make her happy but I’m not happy with it. I’m not feeling with it. It’s not right. I can’t continue to do this to her anymore.”

Booth definitely appears to get blindsided on tonight’s episode, as a preview shows her sobbing on Underwood. And, prior to the split, she says on the show, “I don’t want to be over-confident but I feel like we’re in a good place. He told me that he couldn’t think about anyone else. It’s so sweet. It almost makes me feel worse for other people.” 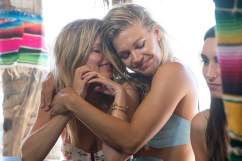