Kanye West decided to air out some of his grievances via Instagram on Thursday. In a series of video posts, the rapper took aim at a number of celebrities, most notably Drake. He chastised Drake for not squashing rumors that he slept with Kim Kardashian, and mocked his on-again/off-again relationship with Rihanna.

“If someone brings my wife up, say, ‘I respect that man, I’m not speaking on that,'” West explained. “Don’t be making no suggestions — like nobody f*ck my wife. Now if I wasn’t in a medicated state I might have thought and had the wherewithal to say, ‘Hey Pusha, don’t diss Drake on my beat and I spoke about that and took accountability for that.” Watch the full video below.

West Warned Drake Not to ‘Speak on His Family’

“Now I told ya, I didn’t tell Pusha no information about your baby, baby mama, nothing, that don’t come from me,” he added. “Don’t speak on nobody from our family nothing that can even be mentioned with my wife period.” The second part of his comment refers to the Drake diss “The Story of Adidon,” which is where Pusha T revealed that the rapper was a father.

West apologized for the diss on Twitter some weeks ago, saying that it was out of line and that he has nothing but love for Drake. “Sending good energy and love to Drake and family and crew… I understand where the confusion started,” he tweeted. “Let me start by apologizing for stepping on your release date in the first place … We were building a bond and working on music together including squashing the issues with [Kid] Cudi at our office.” Despite this promise, however, West goes on to mock the “Nice for What” rapper by mentioning his alleged romance with Rihanna.

“People making rumors or thinking you f*cked my wife and you’re not saying nothing…that don’t sit well with my spirit,” he said. “You know, if I had a girlfriend from Chicago, her name was Renita, and you was married to Rihanna, I wouldn’t make no song called Riri. So when you’re like, ‘Ahhh I don’t know where it come from,’ you too smart for that bro,” West continued. “You know where that come from. Don’t make no record with nothing that can be confused.”

West concluded the message by saying that he doesn’t much care to renew their friendship. “We don’t have to talk again, I’m not giving no energy to that,” he said.

Drake doesn’t seem eager to reconcile either. His verse on the new French Montana single “No Stylist” includes what many believe to be a subliminal dig at West and his Adidas shoe deal. “Keep it a G, I told her don’t wear no 350s ’round me,” he raps. Give the track a listen above. 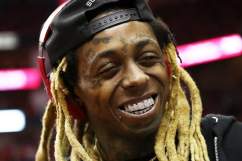 What Time Will Lil Wayne’s ‘Tha Carter V’ Be Released?