Young Thug’s On the Run is almost here. The Atlanta emcee announced that his new album will be released on Tuesday, September 11th. It was originally supposed to be available to stream at 9 p.m. PST or midnight EST, but the album release has since been pushed back.

Alex Tumay, Thug’s engineer, hopped on Twitter to explain the delay. “Turned in mixes before he turned himself in so I could make sure he was happy with it. Clearances take time,” he wrote. He also said that fans should expect the album to drop soon, and revealed that some of the guest features for On the Run will include Elton John, 6LACK, Jaden Smith, and T-Shyne.

Turned in mixes before he turned himself in so I could make sure he was happy with it.

Generally, albums become available around midnight EST on streaming platforms like Apple Music and Spotify. This has been the case with Thug’s previous releases, 2016’s Jeffery and 2017’s Beautiful Thugger Girls. On occasion, these platforms will throw a curveball at listeners.

Take Thugger’s last release, Slime Language, for example. The project was originally set for release on August 16, but it was delayed and did not come out until a few days later. Neither Apple Music nor the rapper himself provided a reason for the delay.

Thug announced the album on Twitter on Sunday, writing: “Album in 2 days” and “ON THE RUN,” which is believed to be the title. If all goes according to plan, On the Run will be Thugger’s major label debut. The aforementioned releases were mixtapes, and Slime Language was a compilation.

In addition to his album rollout, Thug currently had a warrant out for his arrest. According to TMZ, a grand jury warrant was issued in DeKalb County after the rapper was indicted on a series of drug possession charges. Last week, a grand jury also hit Thug with eight felony charges including possession and intent to distribute meth, hydrocodone, and weed, as well as possession of amphetamine, Alprazolam, codeine (two counts), and a firearm.

The release of On the Run contradicts a statement that Thugger made earlier this year. In an interview with Hypebeast, he claimed that he wouldn’t be releasing any new music in 2018 out of respect for his deaf brother. “I got a deaf brother. I got a brother that can’t hear or talk, so I wanna act deaf for a year so I won’t put up any new music this year,” he said. “2019 I’ma put out probably Hi Tunes.”

In addition to his own album, Thugger claims that he’ll appear on the upcoming album by Donald Glover aka Childish Gambino.”[Gambino] got in touch with Reese LaFlare, I think they cool, friends or whatever,” he told Spotify. “He told him to come to the [studio]. He said he has a song for me for his last album. I tweeted one time, ‘I bet I be on Gambino’s last album.’ I’m on his last album, it’s crazy. He’s really not making music after this. So in this picture, I was like, trying to be…I was really frustrated that he wasn’t making music no more but I was trying to be cool.”

Thug has yet to release the artwork or the official tracklist for On the Run. 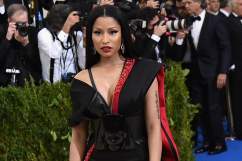