Barbara Tadych, Brendan Dassey’s mother, is Brendan’s biggest supporter to this day – she continues to advocate his innocence to the world and she regularly visit Dassey in jail. Tadych was known as Barbara Janda in the first season of the Netflix docu-series Making a Murderer.

“Brendan tells me they treat him OK. I mean, he plays games with the other inmates. And he does his schooling,” Tadych said during the first season. “He’s trying for his high school diploma. I think he misses everybody. Talks about babysitting. That he misses doing that. Talks about playing his Nintendo.”

Tadych continues to petition for her son’s release and often posts on Facebook with #DefendingDassey posts, videos on how to write to her son and several pictures of herself with Dassey in prison.

Here’s what you need to know about Tadych:

A Facebook page, which has been linked to Barbara Dassey through Bustle, shows just how much Tadych still supports, loves and advocates on her son’s behalf. The page is filled with pictures of herself with her son, complete with slogans of “Free Brendan Dassey,” “Wrongful Conviction Day,” and “Freedom and Justice for Brendan Dassey.”

Tadych also updates her status to let the world know that she doesn’t accept friend requests from people she doesn’t know and continues to claim that, with the release of the second season of Making a Murderer, she and her family were not involved in Teresa Halbach’s death.

“I just want to say one thing if you guys all watched making a murderer part 2 my family did not have any doings in The Disappearance of Teresa halbach. so please stop messaging my son Bobby and my husband Scott,” one post reads. 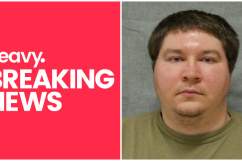 Kiss the Girls: Was the Scene Brendan Dassey Described in the Book?

2. Tadych Has Shared Posts on How to Write Her Son in Prison & Supports Brad Dassey’s Rap About Brendan’s Innocence

She has also posted an instructional video on how to write to Avery and Dassey in jail, and, according to a Vice interview with Brendan’s half-brother Brad Dassey, she has also been supporting Brad’s musical ventures, who wrote a rap claiming Brendan is innocent.)

“I just looked on Brendan Dassey’s mom’s Facebook, and she shared the song and liked the post two days ago,” Brad Dassey said. “What does that tell you right? My family is supportive.”

3. Tadych Once Had a Conversation With Her Son Who Asked Her What the Word “Inconsistent” Means

During a phone call with his mother from jail, during the first season of the docu-series, Tadych and her son discuss the fact that the investigators would like Brendan Dassey to give them another statement, because there seem to be some “inconsistencies” between the original statement he gave and things that have been said in the press.

Brendan Dassey asks his mother, “What does ‘inconsistent’ mean?” And his mother replies, “I don’t know exactly.”

This specific scene in the show tugged on the heartstrings of many viewers, since the Avery family aren’t known for being the most “educated” family in Wisconsin. Several Reddit users discussed the scene on social media threads, with many expressing their frustration that Dassey was still imprisoned when “Dassey really had no way of knowing or comprehending what was being asked of him by investigators when he confessed to the murder,” Business Insider reports.

Whether Dassey and Tadych weren’t sure what the word meant relating to the case, or if they didn’t know the actual definition of the word isn’t completely clear, but many Dassey supporters seem to think this conversation made it clear that Dassey’s confession might not have been truthful, and that he might have just been telling the investigators what they wanted to hear.

In another phone call between Dassey and his mother, Tadych asks Dassey why he confessed to a murder if he didn’t actually commit the crime, to which he replies that he was “guessing” what the police wanted him to say, just like he “guesses answers on homework.”

4. Tadych Says Tom Fassbender & Mark Wiegert Are Liars That Force Innocent People to Say What They Want Them to Say

In the book “Un-making a Murderer: The Framing of Steven Avery and Brendan Dassey,” Tadych gives an exclusive interview about how much she disliked Ken Kratz, the former district attorney for Calument County, and how she felt her son’s interrogation by police without her present was inappropriate.

“Wiegert and Fassbender … take innocent people and lie to them and get them to say what they want them to say,” she said, according to Daily Mail. “Wiegert always said to me that every family has a black sheep in it. Fassbender and [Calumet County Deputy] Wendy Baldwin tried to get me to say bad things about my brother, Steve, that he had sexually molested me.”

She continued: “I think they should put all of them in prison for what they did to us, including Len Kachinsky [Dassey’s defense attorney at the time], who is not any better than the rest of them. He is a lying douche-bag.”

5. Tadych Says The Entire Family Has Been “Heartbroken” By The Murder Accusations, But They Are Grateful For the Documentary Making a Murderer

According to the Daily Mail, Tadych claims the family has been devastated by the entire situation, but is grateful for the docu-series and the fan support that has helped bring attention to Steven Avery and Brendan Dassey’s cases.

“Brendan’s wrongful conviction has taken a toll on all of us. We are heartbroken. We have had counseling for our stress and frustration. Our family has suffered for over 10 years. It hasn’t been easy,” Tadych said, according to the Daily Mail. “Making a Murderer, has done wonders for the family and it has also got the truth out there about the corruption and the liars.”

She also asked supporters to sign a petition calling for the Barbara Tadych Law, which matches juveniles with an attorney during interrogations.

“So this doesn’t happen again to anyone else’s child, I ask people to please sign the petition out there called the Barbara Tadych Law [matching juveniles with an attorney during interrogations], so we can get this passed. And always have someone with you when you are being questioned by the police. Don’t let anyone put words in your mouth that aren’t true. If you didn’t do it, don’t say it.”

READ NEXT: Ken Kratz: Where Is The Former Manitowoc District Attorney Today?