UPDATE: The live results on tonight’s show were … The first couple revealed to be in jeopardy was DeMarcus Ware and Lindsay Arnold, followed by Alexis Ren and Alan Bersten. But, NO ONE was eliminated tonight. The scores and votes will carry over to next week.

It is Disney Night on season 27 of Dancing With the Stars, which means that the performances will be to the theme of Disney movies. Surprises have filled the ballroom this season, when it comes to some of the contestants being in the bottom of the votes, and even a couple eliminations. At the end of tonight’s episode, another couple will be voted off of the show. Read on for our predictions on who could be going home tonight.

What do you think, muggles? Comment ? if you think #TeamKevanna was MAGIC tonight. #DWTS

Last week’s results sent one of the higher scoring couples home – Tinashe and Brandon Armstrong. This was definitely a surprise. But, the other couple in the bottom of the votes was Evanna Lynch and Keo Motsepe. Evanna Lynch has scored decently throughout the season, but she has never had an exceptional night in the ballroom, like some of the other contestants.

Joe Amabile has been one of the lowest scoring contestants in the mix all season, but his fan base has completely kept him out of the bottom of the votes. Not once has Amabile been up for elimination, but, last week’s performance to “I’m Too Sexy” by Right Said Fred was a total trainwreck. Granted, Jordan Kimball, from Bachelor in Paradise, didn’t help the performance, with his big mistakes, but this could have been the performance to take sweet Amabile down a peg.

Amabile is a fan favorite, as is inconsistent contender Bobby Bones, but with the competition narrowing down, one of them could be in the bottom of the votes soon. The IB Times has reported that some DWTS have started to become angry that “more deserving” couples have been eliminated, while Amabile remains in the competition. Has the humble hunk overstayed his welcome? 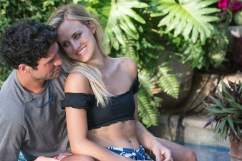 Do Joe Amabile & Kendall Long Break Up on ‘Bachelor in Paradise’?

According to Gold Derby, John Schneider’s odds aren’t that great for sticking it out on the show and there’s a good chance he could be facing elimination. Last week, Joey Fatone joined Schneider and pro partner Emma Slater in the ballroom. There was a slight wardrobe issue, but the routine wasn’t as well-received by the judges as some of the other dances.

Schneider has previously been in the bottom of the votes, so there’s a chance he could end up in the bottom again, especially since he was one of the lower scorers on the show last week. Plus, he may not have the fanbase to keep him going.

Mary Lou Retton has been in the bottom of the votes in a past episode and, even though she delivers great performances, she hasn’t had a truly memorable moment in the ballroom. Alexis Ren is another contestant with these kinds of circumstances in the ballroom. Retton did a great job in the ballroom for Trio Night last week, but, with DWTS results being all over the place lately, Retton could definitely be on the chopping block. Let’s face it, it’s nearly anyone’s game this season when it comes to the votes.

Read More
Dancing With The Stars, DWTS, Reality TV, TV
Tonight, another couple from the 2018 cast will be eliminated on Dancing With the Stars. Get the rundown on our DWTS elimination predictions for episode 7.