Gina Kirschenheiter is a new cast member on Real Housewives of Orange County and, from the beginning of her run, her husband, Matthew, has not appeared on the show. Kirschenheiter appeared to basically be juggling life as a single mother since Matthew’s job kept him across the country. Ironically, she had told the other women on the show that she and Matt had moved to California so that his career wouldn’t affect their home life as much. Unfortunately, the opposite happened and he was traveling a great deal to New York. Some of the women speculated that Gina’s man could have even cheated on her. Regardless of this, Gina said that divorce was the best option for her family.

So, what does Matthew do for a living that keeps him so busy? According to Romper, Matthew and Gina attended college together at Hofstra University, where he graduated with a degree in Business Administration and Finance. Matt then became a financial planner. Matthew reportedly works as Vice President for Regional Manage at PIMCO Investments.

When Gina first signed up to become a cast member on Real Housewives of Orange County, Us Weekly reported that she thought it would be fun to do together with her husband and kids. Gina explained, “I think I did see it as an opportunity that would be good for us, ’cause we’re buddies, we’re friends, we’re just going to navigate this together. And then when he couldn’t film, and he’s also away a lot, I think that it probably did have more of a negative effect on our relationship and made things harder. Now I’m basically going on this venture, and he’s not included and involved in it, and it creates even more distance than is already there.”

Unfortunately for the couple, Matthew never appeared on the show, but Gina said that it had nothing to do with the split. She said that it was actually Matthew’s job that was the problem. Gina said that Matt’s employer would not allow for him to take part in the reality show, according to The Inquistr. During an appearance on The Daily Dish podcast, Gina explained, “My husband, we were doing it together and then he couldn’t film because of his job. So that’s really what it was and I think everybody thinks it has to do with our relationship but it really doesn’t … They just kind of were like, ‘No, you can’t do that,’ and shut it down. And obviously that’s his job. He’s not going to go against it.”

It’s a girl! Please welcome the newest addition to our family. Hilda Kirschenheiter the German Shepherd ??? for the record I was against this and unanimously overruled. Also, pls excuse my pjs and no makeup as Sunday’s r fun days and family days but also scrub the toilet days in the Kirschenheiter household ???‍♀️ ❤️

Since going through the initial split on the show, Gina discussed how she and her husband are dealing with their divorce as a family. In an interview with E! News, Gina said that, “It’s been hard. I actually think the show airing is kind of good for Matt and I because it reiterates that we really are at the core friends and it has helped us be better now. Matt knows 100 percent I have his back and we are in this together and we’re a family and that’s how we’ve always been. Although we don’t have this romantic connection anymore, it doesn’t mean you can’t be family anymore.”

She continued, saying, “This idea that you’re divorced and no longer family to me is so backwards and dated and old school and I refuse to subscribe to it and we’re doing the best that we can to keep our family together. It just looks different now.” 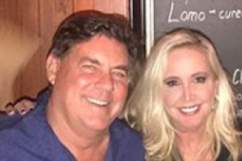 Shannon Beador Moves on From Husband With Boyfriend Scot Matteson

Read More
Bravo, Bravo Housewives, Real Housewives, Reality TV, TV
Gina Kirschenheiter announced she was getting a divorce from husband Matthew on RHOC, after his job kept him from home.