The Good Doctor airs on Monday nights, on the ABC network, at 10 p.m. ET/PT and 9 p.m. CT, airing directly after Dancing With the Stars. Tonight, however, on October 22, 2018, a re-airing of the new show The Rookie will take its place for the evening. The next new episode of The Good Doctor will not air until next week’s 10 p.m. ET/PT and 9 p.m. CT regular Monday night time slot. But, if you’d like to get new episodes of the show as soon as they are available, season 2 of The Good Doctor, along with some individual episodes, are up for purchase on Amazon. If you have a cable TV provider, you can watch the show on the official ABC website. Find additional live streaming options here.

Episode 5 of season 2 will air next week, on October 29, 2018, and the episode is titled “Carrots”. The plot description of the episode states, “When a patient suffering from anorexia can’t gain the necessary weight needed to survive heart surgery, Claire suggests they perform an experimental surgery; Shaun and Lea change the terms of their current relationship.” According to Fan Sided, some of the guest appearances for episode 5 include actress Lisa Edelstein from House; Reiko Aylesworth from 24 and Hawaii Five-0; and actor Richard Schiff’s real-life wife, Sheila Kelley, as Debbie Wexler.

How do you help someone who doesn't want saving? #TheGoodDoctor returns Oct 29!

The Good Doctor opens up its time slot tonight to Nathan Fillon’s new cop drama The Rookie. The show is about an unexpected police rookie, who is getting into the game later than most. After helping to stop a bank robbery, as a civilian, Fillon’s character believes that being a policeman could be his calling in life.

Episode 6 of The Good Doctor season 2 is titled “Two-Ply (or Not Two-Ply)” and it will air on November 5, 2018. According to Broadway World, the plot synopsis of episode 6 reads, “Morgan and Shaun’s indecision on how to treat a young violinist who visits the ER with an infected finger could affect her future in more ways than one. Meanwhile, Lim, Claire and Park can’t figure out if their young patient is really ill or looking for attention.”

For those who need to catch up on what’s happened on The Good Doctor lately, Dr. Glassman was suffering from hallucinations of his dead daughter, while recovering in the hospital. Shaun struggled with getting back into the good graces of Lea, but, ultimately was able to regain her trust. He then dropped a bomb at the end of episode 4, telling her he has rented the two of them a two-bedroom apartment. Lea looks stunned.

Fans also got to know more about Shaun’s upbringing, when he had some flashbacks of one of his foster parents, who was very hard on him. The woman ultimately found out she was terminally ill and ended up telling Shaun he had to leave. Viewers also get an inside look at some of Dr. Melendez’s backstory, making him even more likable. Melendez visits his sister, who is disabled, in a home and is clearly over the moon with his affections for her, though he appears to harbor some guilt about her needing to be in a facility.

Though The Good Doctor will not be on TV tonight, Dancing With the Stars will air as usual, in its regular time slot, from 8 – 10 p.m. ET/PT and 7 – 9 p.m. CT on ABC tonight. For episode 7 of DWTS, the theme is Disney Night, which means that the performances will reflect Disney films. 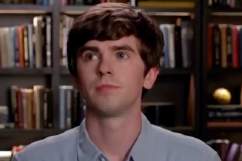 How to Watch ‘The Good Doctor’ Season 2 Premiere Online

Read More
TV
When is the next new episode of The Good Doctor on TV? Is the show on TV tonight? Get the rundown on the time schedule for the show.