Quavo’s debut studio album Quavo Huncho is set for release at 6 p.m. Pacific time or 9 p.m. Eastern time on Thursday. If that is too late for you to stay awake, you can stream and listen to it at your convenience.

Generally, albums become available around midnight Eastern on streaming platforms like Apple Music and Spotify. This was the case for Quavo’s collaborative album with Travis Scott, 2017’s Jack Huncho, Huncho Jack, and his last album with Migos, 2018’s Culture II. On occasion, these platforms will throw a curveball at listeners. The difference here, is that Quavo Huncho will premiere on DJ Khaled’s We the Best Radio, pushing the release time up.

The Album Will Drop at 9 p.m. Eastern Time on Streaming Services

Quavo has teased Quavo Huncho since earlier this year, when he released promotional singles like “Lambtalk”, “Bubble Gum” and “Workin’ Me.” He initially said the album would drop in September, but when the month came and went with no new music, he took to Instagram to announce that the release date had been pushed back to October 12. Quavo also posted a scrap of paper with the album’s potential features. The impressive list included Drake, Travis Scott, Cardi B, Kid Cudi, and Lil Baby. Check out the rest of them below.

The Album Is Rumored to Feature Drake, Travis Scott & Cardi B

In an interview with Hypebeast, Quavo said that he didn’t set out to record a solo album but that it was more a result of getting in the studio and working with so many different artists. “That Quavo Huncho was never calculated,” he explained. “It was just about me having all these features out and everybody assuming that I was gonna do like a solo career. I got too much music. I got to channel it somewhere. So dropping the solo project is a good way to do it.”

Quavo also spoke to GQ about recording with fellow Migos rappers Offset and Takeoff as opposed to recording on his own. “We’re just trying something new. I feel like with the boys, it’s bigger—super, super, super bigger moments,” he said. “If I make myself a great artist by doing this, it only makes our group super, super huge.”

Quavo Said the Album Will Provide Fans With a New Sound

He also revealed that he won’t know what to make of his solo sound until he can feedback from the fans. “That’s what I’ll learn from my fans when I drop my album,” he said. “I’ma just work hard, being the hardest working person on everything, leader, the Huncho, so that’s what you already know what you got coming. I need answers from my fans now. I can’t answer everything.”

To further wet the appetites of music fans, Quavo teased the existence of a collaborative mixtape between Migos and Drake, who are currently touring together. “That will be a whole lotta bangers. I don’t even think we would play around and do regular music,” he said. “We wouldn’t play. We will be just like a whole smash… because that’s how our tour is. It’s a club, from start to finish.” Migos and Drake previously worked together on the hit singles “Versace” and “Walk It Talk It.” 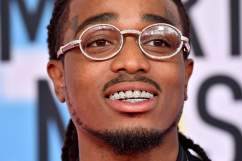