Q uavo is prepping to release his album Quavo Huncho on Friday, October 12. The album has been in the works since earlier this year, and will be the first solo effort by a member of the Migos. Despite being days away from release, however, Quavo has yet to release the album’s tracklist, causing fans to speculate as to which songs (and artists) will make the final cut.

The closest fans have gotten to a tracklist has been a screenshot of what appears to be the back of a CD case. The album’s lead singles, “Lambtalk”, “Bubblegum” and “Workin’ Me” are visible, but the screenshot fills in the rest of the alleged 24 tracks with song titles and guest features. Check it out below.

There are several aspects of the tracklist that make it believable. For one, all three singles are listed, and many of the artists who are featured, including Drake, Lil Baby, Travis Scott and Cardi B were teased by Quavo himself on Instagram. The rapper posted a handwritten list of the artists he’s worked with on October 1. Other names like Kid Cudi, 21 Savage and Offset were also listed, and are featured on SIDE A.

There are, unfortunately, more reasons why the tracklist is likely a fake. For one, the screenshot came from an instantiated source, and neither Quavo nor his camp have taken steps to remove it. Another problem is the amount of songs provided on the tracklist. There have been no reports that Quavo Huncho will be a double-disc set, as is advertised here. There is also the matter of features like Kanye West, XXXTentacion, and Post Malone, who Quavo would have likely included in his Instagram post to further build up anticipation.

The Tracklist Design Is Inconsistent With Quavo’s Cover Art

The exclusion of Davido, a Nigerian artist who Quavo has teased music with, is also a red flag. Davido was listed on Quavo’s handwritten sheet, and the rapper even discussed him during a GQ interview. “Right now, I like Davido,” he said. “That’s my guy. I’ve been rocking with him for a minute. He’s genuine.”

While the screenshot includes the Motown and Quality Control credits, which are Quavo’s respective record labels, the color scheme and title are the biggest reasons to call the validity of this tracklist into question. The bright red scheme seems to contrast with the brown and blue artwork that Quavo confirmed on his Instagram. The screenshot also bills the double album as “Still Quavo”, which is incorrect, as the album has been referred to as Quavo Huncho since August. The title plays off of Quavo’s 2017 collab album with Travis Scott, which was called Jack Huncho, Huncho Jack. 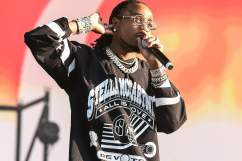 All the Rumored Features on Quavo’s ‘Quavo Huncho’