Tonight, Disturbed is dropping their seventh studio album Evolution. The album has been preceded by a pair of promotional singles, “Are You Ready” and “A Reason to Fight,” as well as teased comparisons to Metallica’s legendary Black Album.

How to Stream & Listen to the New Disturbed Album

Evolution will be made available on a number of platforms at 9 p.m. Pacific Thursday (Oct. 18) or midnight Eastern (Oct. 19) depending on your time zone. We’ve listed the streaming platforms that the album will be released on, and the ways in which you can listen to them below.

The poll closes this Tuesday. Heavy or ballad? (link in bio) Photo by @travis_shinn

You will be able to stream the Disturbed album on iTunes and Apple Music. If you have an Apple Music account, you can go into the app on your phone or tablet and set the notifications to alert you when the album is out. Click here to learn how.

Thank you for listening and spreading the word, Disturbed Ones! You can listen to our new single "Are You Ready" and pre-order/pre-save EVOLUTION on your favorite platform through the link in our bio! Photo by @travis_shinn

Based on the standard release schedule for Spotify, Evolution will also be available to stream on the platform. If you don’t have a Spotify account, you can sign up for one here and pay only $0.99 for the first three months.

Disturbed’s new album will also be available to listen to on Tidal. The streaming service offers a free 30-day trial with Tidal Premium, which provides  access to music videos and curated playlists.

We’re going to be celebrating the release day of EVOLUTION with @iheartradio in NYC on October 19. Tune in to iHeartRadio.com/Disturbed at 7pmET on October 19 to watch our intimate concert live. Details on how to win tickets coming soon.

In an interview with Metal Hammer, Disturbed frontman David Draiman compared the group’s new release to Metallica’s 1991 debut. “If I died after this record came out, and this was the end of our legacy, I’d be OK with that. To me, this is our Black Album.” Draiman went on to discuss the the influence that Metallica, and the Black Album in particular, has had on the group throughout their career.

“We’ve always used that as a goal; the record that literally every single track on it could be a hit,” he added. “A record that breaks doors down, that opens up new opportunities to us, that helps you achieve true immortality as an artist.” Check out the Evolution tracklist below.

We are pleased to announce the North American cities for The Evolution Tour. Stay tuned, more cities to come!!! There are also new Evolution merch bundles available for pre-order in the US and Canada stores (additional bundles coming to other country stores soon). Each includes pre-sale ticket access to The Evolution Tour as well as a download of the Evolution (Deluxe) digital album on October 19 and an instant download of “Are You Ready.” Head to our Story/EVOLUTION Highlight for links!

Draiman also spoke on the band’s 2015 hit, a cover of Simon & Garfunkel’s “The Sound of Silence,” and how it allowed them to push their sound. “‘The Sound Of Silence’ taught us that we shouldn’t be afraid of pushing the boundaries,” he said. “We’ve been hungering for years to do material like what we’ve done on the new record. Some people just like the heavy stuff and they don’t want to take a breather. For me – and I’ve used this analogy before – the slap feels much more satisfying after the caress.”

The band also announced their UK tour dates for 2019, along with a message to their fans. “It is with tremendous pride, joy, and anticipation that we look forward to sharing the next chapter in the creative life of Disturbed with the world,” they wrote. “This record is truly unique, and very special to us, and we can only hope that upon listening to it, that the world will feel the same.” Check out the list of tour dates above. 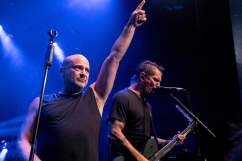 What Time Will Disturbed Album ‘Evolution’ Be Released?