Tonight, Ty Dolla Sign and Jeremih are dropping their collaborative album MihTy. The album was announced late last year, and was preceded by the promotional singles “Goin Thru Some Thangz”, “The Light” and “New Level” featuring Lil Wayne.

Ty and Jeremih’s album will be made available on a number of different platforms at 9 p.m. Pacific Thursday (Oct. 25) or midnight Eastern Friday (Oct. 26) depending on your time zone. We’ve listed the streaming platforms that the album will be released on, and the ways in which you can listen to them below.

You will be able to stream Ty and Jeremih’s new album on iTunes and Apple Music. If you have an Apple Music account, you can go into the app on your phone or tablet and set the notifications to alert you when the album is out. Click here to learn how.

To: All mih ladies goin’ thru some thangz… MihTy coming soon ?

Based on the standard release schedule for Spotify, MihTy will also be available to stream on the platform. If you don’t have a Spotify account, you can sign up for one here and pay only $0.99 for the first three months.

Ty and Jeremih’s new album will also be available to listen to on Tidal. The streaming service offers a free 30-day trial with Tidal Premium, which provides  access to music videos and curated playlists.

In a recent interview, Ty Dolla Sign and Jeremih spoke on the recording process of MihTy and what fans should expect. They described the album as having the “best of both worlds,” which Ty Dolla Sign described by saying that his “low tone” and Jeremih’s “higher tone” of singing gives the music a much “wider range” than they have on their respective solo albums.

The duo released the official artwork and tracklist for the album on Instagram on October 23, after several delays and release date setbacks. While MihTy was originally thought to boast 21 songs, the final tracklist offers up 11 songs, including the aforementioned singles. Guest features include Chris Brown, French Montana, Wiz Khalifa, Lil Wayne, and North Carolina rapper Maliibu Miitch. Check out the tracklist below.

This is not the first time that Ty Dolla Sign and Jeremih have released collaborative albums. Ty teamed up with Wiz Khalifa for 2011’s Talk About It In the Morning, while Jeremih partnered with fellow Chicagoan Chance The Rapper for 2016’s Merry Christmas Lil’ Mama. 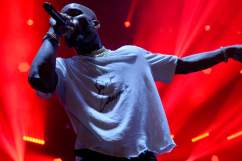 How to Stream & Download Tory Lanez’s ‘Love Me Now?’