The Voice 2018 enters the battle rounds for season 15, which means that a new batch of celebrities come aboard to help out each team as advisers. Two episodes including the battles have aired and there are two more left before the knockout rounds start. Get the know more about each of the celebrities appearing during the battles as guest judges on the show in our rundown below.

Country artist Thomas Rhett has joined Kelly Clarkson’s team as an adviser and recently, Rhett has been touring with Kenny Chesney, according to Taste of Country. With all the talent on Clarkson’s team this season, Sounds Like Nashville reported that Rhett hasn’t had to do much coaching. In fact, he did a lot of praising, comparing contestant SandyRedd to Aretha Franklin and Cody Ray to Chris Stapleton.

CeeLo Green has come aboard Team Adam as an adviser this season and he is actually a veteran judge on the show. That’s right. Green was one of the first coaches to ever be a main cast member on The Voice. In fact, the four judges for season 1 of the show were Green and Christina Aguilera, along with current coaches Adam Levine and Blake Shelton.

According to USA Today, Green’s return to The Voice has sparked some controversy on Twitter. In 2012, Green was accused of date rape by a woman, who said she woke up naked in the singer’s bed. He was accused of drugging the woman and Green ended up pleading no contest to one felony count of furnishing ecstasy. Because of this, some fans protested his appearance on the show. One viewer tweeted, “NO! Disappointing & upsetting that @adamlevine chose a man who drugged & sexually assaulted a woman, jokes about it & doesn’t understand the meaning of ‘consent’ or respect! not someone who ever should Mentor. #TheVoice #TimesUp.”

Halsey has joined Jennifer Hudson in being a guest coach for the battles. In the past, Halsey has performed on The Voice, but she’s never played a part in helping the contestants, until now. Recently, it was announced that Halsey is one of the artists slated to perform at the 2018 MTV EMAs. According to Variety, the show will air live on November 4, 2018. Halsey’s latest single was recently released and it is called “Without Me”.

Keith Urban was a judge on American Idol, so this wouldn’t be his first time helping to coach contestants in their journey’s to stardom. Now, Urban has teamed up with Blake Shelton as a guest judge to advise Team Blake during the battle rounds. When reflecting on his guest spot on The Voice, Urban gushed about Shelton and told Win Country that, “I had a blast doing it … You know, I love being able to try and offer any advice, feedback, insight, guidance — anything — to a lot of these guys and girls who haven’t had that opportunity, haven’t been around people who can give them specific help, you know … But I loved it. Blake was fun to work with.” 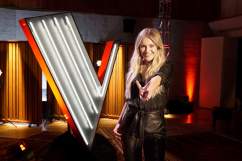 Read More
Reality TV, The Voice, TV
The 2018 judges of The Voice have a new round of advisers and mentors for season 15. Get the rundown on each of them.