Getty Tom Hardy at the premiere of 'Venom.'

V enom has been getting lots of attention due to to its body horror premise and its star-studded cast made up of Tom Hardy, Michelle Williams, Riz Ahmed and Jenny Slate. As with most superhero blockbusters these days, however, fans might be wondering whether Venom has a post-credits scene.

Does ‘Venom’ have a bonus scene after the credits?

Yes. In fact, Sony Pictures, who released the film, made a point of including two different post-credits scenes to set up a potential sequel. Be warned that there will be spoilers for the main plot of Venom and its characters below!

The first scene occurs midway through the closing credits, and introduces Woody Harrelson as prisoner Cletus Kasady. Eddie Brock, the titular hero played by Hardy, arrives at San Quentin to interview Kasady, where he sees that the killer left a “WELCOME EDDIE” sign hanging in his cell. Kasady then looks directly at Brock, and says: “When I get outta here, and I will, there’s gonna be … carnage.”

This is a not-so-subtle nod to the character of Carnage, who Kasady becomes in the after fusing with an alien symbiote in the comic books. He is a long-standing adversary of Venom. Harrelson confirmed that he would be appearing in Venom earlier this year, and told Collider that reuniting with director Ruben Fleischer, whom he worked with on 2009’s Zombieland, was a big reason why.

“Fleischer did Zombieland, directed it, so that was a big part of it,” he explained. “And also, Tom Hardy, I really respect and think he’s one of the great actors. So that, coupled with what is a really wonderful script, I felt like I kind of should, you know?” The Oscar nominee also let slip that he would be appearing in Venom 2 as the primary antagonist. “I’m in a little fraction of this movie,” he said. “But I’ll be in the next one, you know? So I haven’t read that script, but anyways, just rolled the dice.”

The second scene occurs after the closing credits, and sees takes a more loose narrative approach. Rather than tease the future of Eddie Brock or the characters introduced in the live-action film, the scene previews the upcoming animated film Spider-Man: Into The Spider-Verse. We see Miles Morales (voiced by Shameik Moore) chasing after the villainous Prowler. He’s also shown visiting the grave of Peter Parker, the original Spider-Man.

Morales then sees an older Parker, who knocks him unconscious. He wakes up to find that Parker webbed him before he knocked him out, so they’re stuck together as the police show up to chase them. This comes hot on the heels of the second trailer for Into the Spider-Verse, which premiered on October 2. In an interview with Entertainment Weekly, Moore spoke on how his version of Spider-Man differs from those we’ve seen before.

“This power is kind of handed to [Miles] when he’s not really looking for more responsibility,” Moore said “That phrase — ‘with great power comes great responsibility’ — it means the same thing, but it comes from a different place with this Spider-Man.” The film is set for release on December 14. 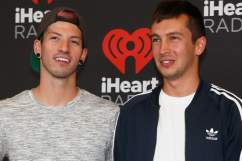 LISTEN: Every Snippet from Twenty One Pilots’ ‘Trench’