Tonight is the premiere of the new VH1 series T.I. & Tiny: Friends & Family Hustle. The reality series, which airs at 8 p.m. Eastern, follows T.I. and Tiny’s previous show, The Family Hustle, which ran for six seasons on VH1.

If you don’t have cable or can’t get to a TV, you can watch VH1 live on your computer, phone or streaming device by signing up for one of the following cable-free, live-TV streaming services:

Philo TV: VH1 is included in Philo’s main bundle, which is the cheapest among all streaming services if you plan on keeping it long-term. Not only that, but you can sign up for a free trial without having to enter any billing information. You’ll get two days for free right off the bat, then if you enter your billing information after that, you will get an additional five more days free. After signing up, you can watch the show live on your computer via the Philo website, or on your phone, tablet or streaming device via the Philo app.

Additionally, if you can’t watch live, Philo also allows you to DVR programs and watch them up to 30 days later. And even if you forget to DVR something, Philo also comes with a 72-hour rewind feature, which allows you to replay any show or event that has aired in the last 72 hours.

Sling TV: VH1 is included in both the “Sling Orange” plus “Lifestyle Extra” bundle or the “Sling Blue” plus “Lifestyle Extra” bundle. You can sign up for a free 7-day trial of either, and you can then watch the show live on your computer via the Sling TV website, or on your phone, tablet or streaming device via the Sling TV app.

Who's ready for the return of the Harris squad!? ?⠀ ⠀ Atlanta's biggest music families unite TONIGHT at 9/8c on VH1! #FamilyHustle @troubleman31 @majorgirl

Friends & Family Hustle makes good on its title, as the show sees T.I. and Tiny joined by longtime friends Toya Wright, Reginae Carter, Monica Brown, LeToya Luckett and Tommicus Walker. According to the, the show will chronicle the personal lives and careers of this ensemble, and the support they give one another on a weekly basis.

Wright previously starred opposite Tiny, born Tameka Cottle, on the popular VH1 series Tiny & Toya. Wright is the ex-wife of rapper Lil Wayne, and her daughter Reginae Carter was recently featured on Wayne’s acclaimed album Tha Carter V. Other notable cast members include Luckett and Walker, newlyweds who have teased their involvement in the series on Instagram.

Newlyweds, @LeToyaLuckett & @tommicuswalker are trying to balance it all — moving, marriage, and a baby on the way ????⠀ ⠀ Get to know the Walkers more on #FamilyHustle MONDAY at 9/8c on VH1! @toyaandtommi

“Newlyweds, @LeToyaLuckett & @tommicuswalker are trying to balance it all — moving, marriage, and a baby on the way,” read the caption on the official Friends & Family Hustle page. Luckett is best known for being a member of Destiny’s Child from 1993 to 2000.

The trailer for Friends & Family Hustle also teases a storyline involving T.I. and Tiny’s marital infidelity. “Are you familiar with the commandment, thou shalt not judge?” the rapper asks. Tiny, formerly of the group Xscape, responds by saying: “thou shalt not cheat.” 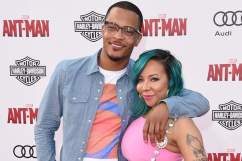