Tonight’s episode of American Horror Story for season 8 is titled “Fire and Reign”. For those who do not have a cable subscription or login information, you may be looking for alternative ways to watch the show. Tonight is episode 9 and it airs on the FX channel at 10 p.m. ET/PT, in the Wednesday night time slot on the network, as always, but tonight’s show will run longer than usual.

For those who would like to watch tonight’s episode of AHS: Apocalypse or any of the season 8 episodes via Amazon, American Horror Story season 8 is available to buy on Amazon. Individual episodes of the show are available for anyone to purchase, starting at $1.99 – $2.99, and the entire season is available for $18.99 – $24.99 as well.

Next week, on November 14, 2018, the season will come to an end, with just 10 episodes for the entire season. The finale episode is titled “Apocalypse Then”.

Ahead of tonight’s episode, fans have been coming up with different theories about how the season will end. Some believe Mallory may be the actual Antichrist, the true supreme or Michael Langdon’s twin. According to Inverse, the show may reveal some history on the Cooperative during episode 9.

Season 8 of American Horror Story has included two previous seasons of the show – AHS: Murder House and AHS: Coven. There are moments taken from AHS: Hotel as well. Generally, American Horror Story has a completely different storyline and cast of characters every season, though many of the same actors return. They just play different roles. Certain characters have made small appearances in different seasons over the years, but season 8 is the only season to actually involve previous storylines. 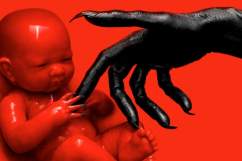 For those who may be wondering about the future of the long-running AHS series, the show does not end this season. FX CEO John Landgraf stated at a TCA winter press session that, “The entire creative team will continue to deliver the groundbreaking, celebrated American Horror Story for years to come,” so, it doesn’t sound like the show is coming to an end soon. In fact, show creator Ryan Murphy previously said that, “I’ll keep doing it for as long as we have the ideas and the momentum. I really love doing it.”

Tune in to watch American Horror Story: Apocalypse as it wraps up its season, on Wednesday nights at 10 p.m. ET/PT and 9 p.m. CT.