Kathleen Zellner and Ken Kratz have been at odds with each other for some time, especially since the second season of Making a Murderer aired on October 19. Kratz has repeatedly called Zellner’s methods “junk science” as she tries to prove Steven Avery’s innocence, and claims that the Wisconsin court considers her evidence a “joke.”

Kratz, the former district attorney for Calumet County in Wisconsin, quickly gained prominence for trying the infamous Wisconsin v. Steven Avery case that the original 2015 Making a Murderer documentary was based on. 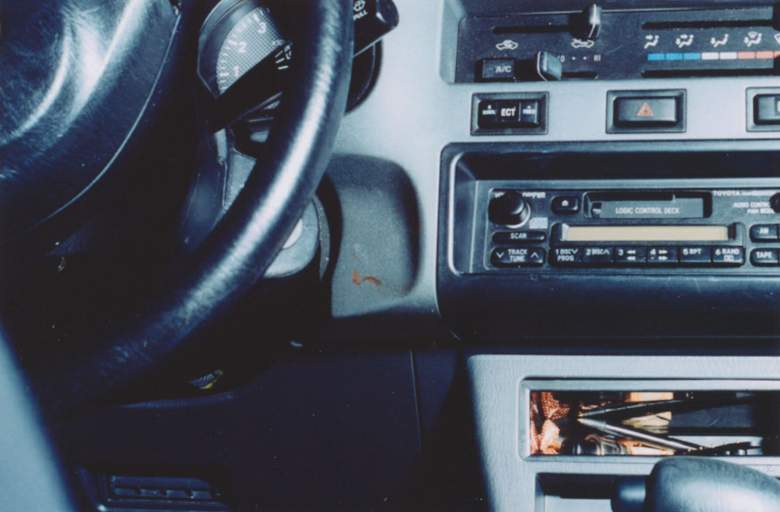 Manitowoc courtsSteven Avery’s blood was found in Teresa Halbach’s car, according to the state. In this crime scene photo, you can see a small blood smear on the car’s console.
Authorities centered their case around the forensic evidence, but the defense has attacked the credibility of the blood evidence and alleged it was planted at the scene.

Kratz recently responded to a series of questions from USA Today Network-Wisconsin about the second season of the docu-series, slamming Kathleen Zellner for the new evidence that she claims to have regarding Avery’s innocence. Kratz claimed Part 2 of the series left out critical evidence in his reasoning against Avery and stated the first season did the same, and called her evidence “junk science.”

“The second season, unfortunately, uses the same playbook as Season 1: deceptive editing, the omission of crucial evidence and personal attacks against the prosecutors, cops, and Teresa’s friends, which combine for a very one-sided view,” he said.

Kratz’s role in the Steven Avery case has been the subject of much debate since the series first debuted. Kratz reportedly refused to cooperate with producers or interviewers during the filming of the series, and he later criticized them, claiming they had deliberately left out key pieces of evidence. Since Zellner took over Avery’s defense, he has had much to say on her research methods and the way she conducts her investigation.

During his conversation with USA Today Network – Wisconsin, he mentions Zellner’s research tactics, and her attempts to discredit the prosecution’s crime scene evidence that was used to convict Avery, calling her new evidence a “joke,” and claiming the Wisconsin courts don’t take her seriously. He also claims her interests in exonerating Avery are just a publicity stunt.

#askzellner @MakingAMurderer On the blood in the sink—SA has given us an affidavit averring Bobby was with him when he his finger was bleeding and that taillights SA saw matched Bobby's blazer pic.twitter.com/wKpt0ZcRHM

“The audience is never told that Attorney Zellner’s ‘new evidence’ was little more than junk science, with its results having so little relevance to the contested issues that the court rejected them without even needing an evidentiary hearing,” he told USA Today. “Most legal experts in Wisconsin view Attorney Zellner’s ‘new evidence’ as a joke. I’m not sure how many times she needs to be thrown out of court before she admits her promises of identifying the ‘real killer’ was nothing but a desperate publicity stunt.”

Zellner isn’t shy about responding to fan questions and other inquiries about Avery’s case, and didn’t hold back from reacting to Kratz’s accusations that her research methods were a joke. She recently took to Twitter to respond to some of his accusations.

So the sweaty, sexting, ex-prosecutor Ken Kratz who has never met the likes of my experts is blabbing again about “junk science” w/ a suspended law license. ⁦@lifeafterten⁩ ⁦@EFMoriarty⁩ ⁦@michellemalkin⁩ #NOCREDIBILITY pic.twitter.com/LNr01tw5Zp

“So the sweaty, sexting, ex-prosecutor Ken Kratz who has never met the likes of my experts is blabbing again about “junk science” w/ a suspended law license,” Zellner wrote on Twitter on November 1.

Zellner’s “sexting” comment refers to an incident that occurred in October 2009, when Kratz was involved in a scandal after the former D.A. was accused of “sexting” a domestic violence victim whose boyfriend he was prosecuting. The victim filed a police report in Kaukauna, Wisconsin, alleging that Kratz had sent her 30 sexually suggestive text messages over the span of three days. She told police she felt that Kratz was trying to coerce her into a sexual relationship at the risk of dismissing the case against her boyfriend. During the investigation, two more women came forward accusing Kratz of similar intimidation and harassment. At the time, Kratz was serving as chairman of the Wisconsin Crime Victims’ Rights Board. He resigned the following October, and settled in court with the victim in 2013.

She followed up the post with another, stating: “In contrast to the sweaty, sexting ex-prosecutor Kratz there are great prosecutors like Jim Glasgow who released my client and w/FBI caught the real killer of 3 yr. old Riley Fox,” referring to a client that Zellner helped exonerate year ago, who was accused of raping and murdering his own 3-year-old daughter.

In contrast to the sweaty, sexting ex-prosecutor Kratz there are great prosecutors like Jim Glasgow who released my client and w/FBI caught the real killer of 3 yr. old Riley Fox. ⁦@lifeafterten⁩ ⁦@michellemalkin⁩ ⁦@EFMoriarty⁩ #MakingAMurderer2 pic.twitter.com/gph7k7gAAe

She also posted a tweet claiming that the “only thing that was left out of the first season of MaM was evidence this sweaty, sexting disgraced prosecutor concealed from SA’s [Steven Avery’s] trial.”

The only thing left out of the first season of MaM was evidence this sweaty, sexting disgraced prosecutor concealed from SA’s trial team…btw that evidence is in MaM2 E8,9,10 ⁦@lifeafterten⁩ ⁦@michellemalkin⁩ ⁦@EFMoriarty⁩ #MakingAMurderer2 pic.twitter.com/FeGon9eomT

Zellner is known for her feisty and outspoken demeanor, so her tweets were not at all surprising to those who follow the appellate attorney through her previous exonerated cases or her attempts to free Steven Avery.

READ NEXT: Making a Murderer 3: Will There Be a Third Season?