Getty Kim Porter and her children.

Kim Porter has died. The model and former girlfriend of Sean ‘Diddy’ Combs was found dead at her Los Angeles home on Thursday. She was 47. According to TMZ, Porter had be suffering from flu-like symptoms, and possibly pneumonia, for the past several weeks. Her cause is death has yet to be determined.

Porter had three children with Diddy during their thirteen year relationship, and raised a fourth that Porter had from a previous relationship. Learn more about them and their respective careers below.

1. Their Son Christian Combs Is a Dolce & Gabbana Model & Rapper

Porter and Diddy gave birth to their son Christian ‘King’ Combs in 1998. Combs has gone on to become a model for Dolce & Gabbana and recently inked a deal to take part in Tommy Jeans’ Spring 2018 campaign. Combs also models for his father’s fashion line Sean John.

“I feel blessed to be a part of it,” he told Essence about being a model. “To see it come from when I was a baby to where it is now, I’ve seen my dad put in so much work and it’s just great to be a part of this history. When I was younger, I didn’t take it as serious because it was just something that was a part of my life. I didn’t know how great it was to have a clothing line like this. But now, to look back on it and to see all the campaigns I used to do and the history that I was a part of… it’s super dope.”

In addition to his modeling career, Combs has released music on his father’s label Bad Boy Records. He released his first official single “Love You Better” featuring Chris Brown, on February 9, 2018.

When asked about balancing modeling and rapping, Combs told Billboard: “I’m in the studio all the time and you know, the modeling stuff is like having one car you go and drive once in awhile, but it’s not like an everyday thing for me right now. Music is really an everyday thing.”

2. Their Twin Daughters Jessie James and D’Lila Are Child Models

And just like that , my lil ladies Jessie and D’Lila are off to Middle School ?? #timekeeponticking

Porter and Diddy gave birth to their twin daughters Jessie James and D’Lila in 2006. The pair began modeling at a very young age, as Bossip reports they landed their first print ad campaign in 2014 as spokesmodels for Ruum American Kids’ Wear.

In 2016, Jessie James and D’Lila posed for the cover of Halycon Kids. Porter posted a photo of the pair on her Instagram with the caption: “JESSIE and D’LILA cover girls for @halcyon.kids !!’ They get it from they MAMA !!!”

Porter frequently posted about the girls on her Instagram. This past September, she uploaded a photo of them with the caption:Identical Twin’s … I just love watching the Bond they Share … they just get each other.” Less than a week after, she posted a photo of them on their first day of middle school. “And just like that,” she wrote. “My lil ladies Jessie and D’Lila are off to Middle School.”

3. Porter’s Son Quincy Is From a Previous Relationship With Singer Al B. Sure!

Quincy Taylor Brown was born on June 4, 1991 to Porter and R&B singer Al B. Sure! The couple split shortly after, however, and Quincy was adopted by Diddy as own his son. He godfather is legendary musician and producer Quincy Jones, whom he is named after. He explained the confusion surrounding his family lineage during an interview with the Jasmine Brand.

“My last name is Combs, my last name is Brown – I go by Quincy,” he explained. “If I was able to take off the Brown and the Combs for my brand… I might do that, you know? But dealing with how they structure things I don’t mind the ‘Quincy Brown’ being my actor name and just the ‘Quincy’ as an artist, as a brand but either way I’m Quincy.”

Like Porter and Diddy’s other children, Quincy has found success in many different avenues. He’s an actor, having appeared in films like Brotherly Love and Dope and the television series Star, on which he has a recurring part. He’s released a handful of singles under the Quincy moniker, including “Stay Awhile” featuring Kendra and “Friends First” featuring French Montana.

He’s also a model represented by the Wilhelmina modeling agency. He walked the runway for Naomi Campbell’s Ebola awareness show for New York Fashion Week in 2014, and is also the founder of the production company FourXample.

4. Diddy Had Chance Combs With Another Woman During His Time With Porter

HAPPY BIRTHDAY @diddy on this day a GENIUS was born ,may you continue to be the Driving Force of ENERGY that GOD created you to be !! Thank you for giving me the best gifts of life our CHILDREN !! ❤️❤️????????????

In an interview with Essence Magazine, Porter details learning that Diddy had fathered a child with another woman named Sarah Chapman. The child, Chance Combs, was born five months after Jessie James and D’Lila. “It’s not an original script. He’s not the first man who’s cheated,” Porter explained. “He’s not the first man who’s had a baby outside of his relationship. He’s not the originator of this. But at this point in my life ? I have girls now ? it’s a different program.”

Porter also expressed regret over the fact that she didn’t learn about the other child directly from Diddy. “I would have preferred to find out from him because that’s a man,” she revealed. “I know it’s hard for anyone to say to their significant other, ‘I’ve gotten into some sh*t and I got a baby on the way.’ But men do get caught up in things; I’m not naive to that. Still, there’s a right and a wrong way to handle it. Because, most of all, we were friends. Even if I couldn’t have understood it as a woman, I would have understood it as a friend.”

Porter continued: “He told me that he may have gotten himself into a situation and he may have fathered another child outside the relationship and I said, ‘Really? Well, I already knew. I’m glad you decided to be a man,’ ” recalls Porter. “I was like, ‘Dude, this is so wack I can’t even respect you right now.’ And for me, once the respect is gone, I’m not even listening to you.”

5. Porter Stayed Friendly With Diddy After Their Split to Raise the Kids Together

Even after she and Diddy split in 2007, Porter made a point of keeping her family close. She continued to post photos of the kids with Diddy on her Instagram, and told Essence that her bond with the music mogul remained strong. “You know how when two people go their separate ways, most of the time there’s animosity? It’s not like that with us,” she explained. “Sean and I have this bond, this friendship. It’s not about ‘if you’re faithful to me, if I’m being faithful to you.’ We’re friends.”

“I’m the person he can tell his inner most thoughts to and he’s that person for me,” she continued. “He still calls me everyday and we talk. There’s no ill feeling or ‘I can’t stand you, I hate you, don’t call.’ There’s none of that. We have three children together so that’s just not an option. We’re committed to our children even if we couldn’t commit to each other.” 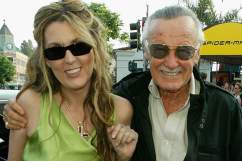