Getty Jon B. performs onstage during the 2018 Soul Train Awards, presented by BET, at the Orleans Arena on November 17, 2018 in Las Vegas, Nevada.

Two of the major honors that were handed out at this year’s awards ceremony include the Legend Award, which is given to Erykah Badu and the Lady of Soul Award, which is given to Faith Evans. Both recipients are included in the performers’ lineup. Other performers, according to The Glow Up, are Bell Biv Devoe, Jon B., Donell Jones, Carl Thomas, Kid ‘n Play and Al B. Sure.

Ronnie DeVoe, Ricky Bell, and Michael Bivins all make up Bell Biv Devoe. Recently, DeVoe and his wife appeared as two new cast members on Real Housewives of Atlanta, which also airs at 8 p.m. ET/PT and 7 p.m. CT tonight. The DeVoes are friends with music producer, artist and RHOA cast member Kandi Burruss. According to Celebrity Insider, Devoe wasn’t sure that he wanted to be a part of the reality series, but he ended up coming around to the idea.

The Soul Train Awards show was Al B. Sure’s first public appearance after hearing his ex and mother to his son, Kim Porter, had unexpectedly passed away. Porter is also a mother to several of Sean “Diddy” Combs’ children. Several big names in the music and entertainment industry attended Porter’s funeral today, on November 25, 2018, according to People. Combs spoke at the services, telling funeral attendees, “I just want to say to my kids, Justin, Christian, D’Lila, Jessie, Chance and the other man in the house, Quincy: Your mother instilled in me this, and I pledge in front of everybody right now that I will always be there for you. I will always take care of you.” Quincy is Al B. Sure’s son, but Combs appears to have been very close to Quincy over the years, treating him like his own.

Essence reported that Al B. Sure also gave an emotional tribute to Porter on Instagram, referencing Porter’s influence on his writing of Jodeci’s 1991 hit song, “Forever My Lady.”

The ’90s appear to be a major inspiration for this year’s Soul Train Awards, according to EurWeb, which makes a Kid ‘n Play appearance perfectly fitting. In the past, this has been a trend with the Soul Train Awards as well.

When it comes to the presenters at the 2018 Soul Train Awards, they include SZA, Tami Roman, Darrin Henson, Javicia Leslie, Justine Skye, Normani, and Sinqua Walls, as reported by BET. These are just some of tonight’s presenters. Many know Normani from the group Fifth Harmony and from her appearance as a contestant on Dancing With the Stars. In March 2018, the band announced their decision to go on an indefinite hiatus, to pursue solo careers, according to Billboard. Tami Roman has made quite the name for herself on reality TV, while some of the other presenters are in the acting game, as well as in music. 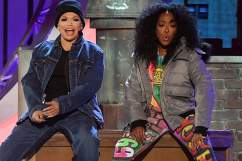