Spongebob Squarepants creator Stephen Hillenburg has died at age 57. According to Variety, Hillenburg’s cause of death was ALS, or amyotrophic lateral sclerosis. “We are incredibly saddened by the news that Steve Hillenburg has passed away following a battle with ALS,” Nickelodeon wrote in a statement.

“He was a beloved friend and long-time creative partner to everyone at Nickelodeon, and our hearts go out to his entire family,” the network added. “Steve imbued SpongeBob SquarePants with a unique sense of humor and innocence that has brought joy to generations of kids and families everywhere. His utterly original characters and the world of Bikini Bottom will long stand as a reminder of the value of optimism, friendship and the limitless power of imagination.”

Hillenburg revealed that he was suffering from ALS back in March 2017. “I wanted people to hear directly from me that I have been diagnosed with ALS,” he wrote in an official statement. “Anyone who knows me knows that I will continue to work on SpongeBob SquarePants and my other passions for as long as I am able. My family and I are grateful for the outpouring of love and support. We ask that our sincere request for privacy be honored during this time.”

Nickelodeon also released a statement on the heels of Hillenburg’s 2017 announcement, saying that they will continue to support him and his decision to keep working on Spongebob episodes. “Stephen Hillenburg is a brilliant creator who brings joy to millions of fans,” the network said. “Our thoughts and support are with Steve and his family during this difficult time. Out of respect for their wishes for privacy, we have no further comment.”

Hillenburg Continued to Work on Episodes of ‘Spongebob’ Despite His Diagnosis

ALS, according to the ALS Association, is a progressive neurodegenerative disease that affects nerve cells in the brain and the spinal cord. “When the motor neurons die, the ability of the brain to initiate and control muscle movement is lost,” the website states. “With voluntary muscle action progressively affected, people may lose the ability to speak, eat, move and breathe.”

Hillenburg created Spongebob Sqaurepants, which debuted in 1999, and directed 2004’s The SpongeBob SquarePants Movie. He also co-wrote and executive produced 2015’s The SpongeBob Movie: Sponge Out of Water. At the time of his death, he was serving as executive producer on the series, which has topped 200 episodes and is currently the second longest-running animated children’s series on U.S. television. It is also the longest-running Nickelodeon series ever.

Hillenburg Is Survived By His Wife Karen & Their Son Clay Hillenburg

Thank you, Stephen Hillenburg, for bringing joy and happiness to kids of all ages. https://at.nick.com/rememberingstephen

The official Instagram account for Spongebob released a statement following the news of Hillenburg’s death. “Thank you, Stephen Hillenburg,” it read, “for bringing joy and happiness to kids of all ages.” In a 2004 interview with the East Valley Tribune, Hillenburg spoke on the pressure of constantly evolving the show for fans.

“It’s a double-edged sword. We love the fact that people love the show,” he explained. “I wouldn’t want it to sound like sour grapes. You can’t have it both ways. If you put something out there, and everybody likes it, you have to accept that. I personally like things before they get too big and get in everybody’s face. That’s the downside of success.”

Despite the success of the series, Hillenburg was known for keeping his personal life out of the public eye. “I make animation because I like to draw and create things,” he said. “I have no real interest to be on camera or to be a celebrity. It’s not that I don’t like people, but I like having my privacy.” Hillenburg is survived by his wife Karen and their son Clay Hillenburg, who was born in 1998. 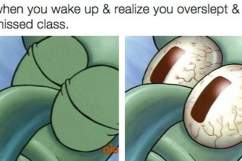