How to Listen to Lil Peep’s ‘Come Over When You’re Sober, Pt. 2′

Come Over When You’re Sober, Pt. 2 will be made available on a number of platforms at 9 p.m. Pacific (Nov. 8) or midnight Eastern (Nov. 9) depending on your time zone. We’ve listed the streaming platforms that the album will be released on, and the ways in which you can listen to them below.

Come Over When You're Sober, Pt. 2 will be released November 9.  It's just what we all would have expected from Gus. Thanks to @smokeasac for pouring his heart and soul into it for all of these months. Gus’ art is an essential part of the album packaging–it is a pleasure to see a range of Gus's colorful, witty drawings in the vinyl and other physical versions. I think the vinyl record itself is absolutely beautiful. It is designed and crafted with care. More information will be posted about all of that, so stay tuned. Also, I am excited to say that Gus's Cry Alone video is now officially released.  In my excitement to upload it I gave you all a sneak preview last night. Love, Liza PS Go Peep!

You will be able to stream Lil Peep’s album on iTunes and Apple Music. If you have an Apple Music account, you can go into the app on your phone or tablet and set the notifications to alert you when the album is out. Click here to learn how.

Based on the standard release schedule for Spotify, Come Over When You’re Sober, Pt. 2 will also be available to stream on the platform. If you don’t have a Spotify account, you can sign up for one here and pay only $0.99 for the first three months.

Lil Peep’s album will also be available to listen to on Tidal. The streaming service offers a free 30-day trial with Tidal Premium, which provides  access to music videos and curated playlists.

Lil Peep – Cry Alone (Official Video)‘Come Over When You’re Sober, Pt. 2’ out Nov. 9: http://smarturl.it/COWYS2   “Cry Alone” out now:  http://smarturl.it/CRYALONE   Produced by Smokeasac and IIVI DIRECTOR’S NOTES: Peep and I shot Cry Alone back in May 2017.  He originally thought it was going to be a track included on COWYS1, but it ended up fitting better on COWYS2 which inevitably postponed the videos release… Here's the story:   It was around 1AM when I saw Peep on Twitter asking if someone could bring him McDonalds in Berkeley. I texted him asking what he was doing in town (I was living in the Bay Area at the time) and he told me he'd just finished his show in SF, but that I should come to his hotel and maybe take some photos if I was down. Ever since I met him, we talked about shooting various videos, but nothing ever came into fruition so I suggested we shoot a music vid that night. He said it was perfect timing cause he'd just recorded a bunch of new music and that we'd pick a song when I got there. After listening to a few different songs and discussing ideas we chose Cry Alone. “It just feels right”, he said. “It's the only song that fits the energy of the night”.   Directed & Edited by @maxdotbam Video produced by @getmezzy Shot in Berkeley, CA in May 2017   /////   http://www.lilpeep.party/ http://twitter.com/lilpeep http://instagram.com/lilpeep http://soundcloud.com/lil_peep http://facebook.com/lilpeepmusic2018-10-18T13:30:02.000Z

Come Over When You’re Sober, Pt. 2 has been teased since Lil Peep’s death on November 15, 2017. Peep’s longtime producer Smokeasac confirmed the album’s existence on Twitter, and has spearheaded the promotional rollout, and released music videos as well as tease possible collaborations. “There’s material for sure. I have a decent amount of songs with him and then he has music with other producers like Harry Fraud [and] Diplo,” he told NME.

The tracklist for Come Over When You’re Sober, Pt. 2 was released along with the iTunes pre-order link, and features 11 tracks including the previously released single “Cry Alone.”

Future Lil Peep Albums Have Been Teased By Producer Smokeasac

Smokeasac also teased the existence of a collaborative album between Peep and Los Angeles rapper iLoveMakonnen. “There’s an album with iLoveMakonnen. I’m glad to be a part of that. I produced, I think, like six of the songs on the Makonnen album,” he said. “That’s something people can be excited about, too. It was a big change, I guess, in his energy. Come Over When You’re Sober Pt. 2 – Come Over When You’re Sober in general, really – and the Makonnen record is some of his best work.”

“When the time is right we’ll release the stuff with Makonnen,” Smokeasac added. “I speak to Peep’s mom all the time and I want to make sure that she approves of everything. It’s a similar thing, in demo form. It’s a finished album vocals-wise but me and Makonnen will go back into the studio and finish everything off.” 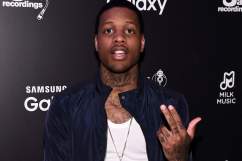 How to Stream Lil Durk’s ‘Signed to the Streets 3’