Tonight, Little Mix is dropping their fifth studio album LM5. The album was announced on October, along with a tracklist and the promotional single “Woman Like Me” featuring Nicki Minaj, which peaked at number four on the US Bubbling Under Hot 100 Singles.

How to Stream & Listen to Little Mix’s New Album ‘LM5’

Little Mix’s album will be made available on a number of different platforms at 9 p.m. Pacific Thursday (Nov. 15) or midnight Eastern Friday (Nov. 16) depending on your time zone. We’ve listed the streaming platforms that the album will be released on, and the ways in which you can listen to them below.

It's time! You can pre-order #LM5 now! Pre-order on our official store before 3pm on Tuesday to get exclusive access to the #LM5TheTour UK pre-sale!

You will be able to stream Little Mix’s new album on iTunes and Apple Music. If you have an Apple Music account, you can go into the app on your phone or tablet and set the notifications to alert you when the album is out. Click here to learn how.

#LM5 Super Deluxe has all 18 tracks included in the Deluxe album, with exclusive artwork, new pics and handwritten notes in a hardback book. 16.11.2018 ?

Based on the standard release schedule for Spotify, Little Mix’s LM5 will also be available to stream on the platform. If you don’t have a Spotify account, you can sign up for one here and pay only $0.99 for the first three months.

Little Mix’s new album will also be available to listen to on Tidal. The streaming service offers a free 30-day trial with Tidal Premium, which provides  access to music videos and curated playlists.

Little Mix announced their album on October 15 on Twitter. “We love how you’ve named each of our eras over the years,” they wrote. “So we’ve decided to call our next album… #LM5. We’ve worked so hard on this, we are so proud & can honestly say this is our favourite album to date. You’ll be able to pre-order it from THIS FRIDAY. 16.11.2018. The girls x.”

The group has also released a slew of promotional singles leading up to the album, including “Joan of Arc” on November 2, “Told You So” on November 9, and “The Cure” on November 13. The standard tracklist for the album includes 14 tracks, with features from Sharaya J and Kamille, while the deluxe edition includes four bonus tracks. Check it out below.

We saved this from the meeting where we finalised the #LM5 tracklist …now it’s all yours ♡ Pre-order with the link in our bio. 16.11.2018 X the girls

In an interview with Billboard, the group said that LM5 is their most daring release to date. “For this record, I guess we were just feeling a bit more ballsy,” said Jade Thirlwall. “We’ve gained confidence as writers over the years, and for this album in particular we definitely wanted to have strong messages about female empowerment and being a woman. We keep saying this is the album we’ve always wanted to make.”

“I feel like we are more confident than ever,” added Leigh-Anne Pinnock. “We just have so much more to say in general — we’ve had more life experiences, we’re getting older. We’re just four girls with attitude, aren’t we? It just happened naturally. And with songs like ‘Joan of Arc’, they needed that rap-y take on it. ‘Wasabi’ has that clap-back-to-the-haters vibe.”

Thirwall also said that the group feel more liberated to write about what they want. “It’s such a weight off your shoulders to be able to write something and not be scared anymore,” she explained. “Maybe like four or five years ago, if we’d written a song about sex or feminism or loving yourself and thinking you’re amazing, we’d be like, ‘Oh no, we can’t do this.’ Now it’s like, ‘You know what? That’s how we feel — let’s write about it!’ It’s fine to do that. We’ve earned the right to.” 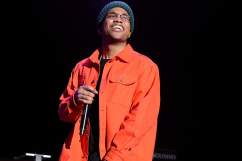