Tekashi 6ix9ine’s fans are getting to experience his debut studio album ahead of its official release date. Dummy Boy was originally set for release on November 23, but was delayed due to the rapper’s current legal troubles. Dummy Boy was reportedly pushed back to an unspecified date, but that didn’t stop the album from leaking late on Saturday evening.

The 13-track album, which features collaborations with the likes of Kanye West, Lil Baby, Gunna, Nicki Minaj and Bobby Shmurda, appeared for sale on 6ix9ine’s website on Saturday. It is unclear how the album appeared, but the link was taken down shortly after. 6ix9ine’s debut mixtape Day69 is currently the only project available for purchase on the site.

While it is still unknown who leaked the album, Newsweek reports that one of Dummy Boy’s producers may have uploaded it on his own accord. Murda Beatz, who worked with 6ix9ine on the hit single “FEFE,” alongside Nicki Minaj, recently teased the album’s artwork on Instagram with the caption, “I HAVE THE ALBUM SHOULD I…” Fans have pointed to this post, which features the presumed album artwork, as proof that Murda Beatz, is responsible. It has since been removed from Murda Beatz’s account.

The link that existed on 6ix9ine’s website now directs to a “404” page. While the original link is no longer available, Dummy Boy is now available to download and stream on various different bootleg sites.

the album was originally due out on november 23 and features appearances from kanye west, nicki minaj, lil baby, and morehttps://t.co/bJNSRTLNnD

6ix9ine released the proper Dummy Boy tracklist on Instagram on November 19, but announced that the album would be delayed a mere three days later. “Due to circumstances beyond our control,” read the post, “We have postponed the release of Tekashi 6ix9ine’s Dummy Boy until further notice.” The rapper has yet to comment on the leak.

The album was preceded by the singles “TATI” featuring DJ Spinking, “Bebe” featuring Anuel AA, “Stoopid” featuring Bobby Shmurda, and “FEFE” featuring Nicki Minaj and the aforementioned Murda Beatz. The latter peaked at number three on the Billboard Hot 100, making it 6ix9ine’s biggest hit to date. Check out the video above.

6ix9ine is currently facing a minimum 32 year sentence for racketeering and other serious charges. According to TMZ, the rapper and his crew conspired to commit a slew of crimes, including drug deals, armed robberies and shootings. He reportedly entered a not guilty plea, and the judge has set his trial date for September 4. TMZ adds that 6ix9ine will likely spend most of this time behind bars, as he has already been denied a $750K bail. 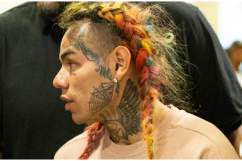