After a last-minute delay and an accidental internet leak, Tekashi 6ix9ine has released his debut studio album Dummy Boy. According to Rolling Stone, the album is now made available on all streaming services, despite the fact that 6ix9ine is currently behind bars.

Sources in 6ix9ine’s camp as well as rap personality DJ Akademiks confirmed that it will officially come out on Tuesday, November 27. We’ve listed the different platforms that the album will be released on, and the ways in which you can listen to them below.

You will be able to stream 6ix9ine’s new album on iTunes and Apple Music. If you have an Apple Music account, you can go into the app on your phone or tablet and set the notifications to alert you when the album is out. Click here to learn how.

Based on the standard release schedule for Spotify, 6ix9ine’s Dummy Boy will also be available to stream on the platform. If you don’t have a Spotify account, you can sign up for one here and pay only $0.99 for the first three months.

6ix9ine’s album will also be available to listen to on Tidal. The streaming service offers a free 30-day trial with Tidal Premium, which provides  access to music videos and curated playlists.

Dummy Boy was originally scheduled for release on November 23. 6ix9ine confirmed the release date on his Instagram, and even released the official tracklist, which includes thirteen tracks and guest verses from the likes of Gunna, Lil Baby, Nicki Minaj and Kanye West. Watch the music video for the lead single, “FEFE”, above.

After the rapper was arrested on charges of racketeering, however, his camp announced that the album would be delayed indefinitely. “Due to circumstances beyond our control,” read the post, “We have postponed the release of Tekashi 6ix9ine’s Dummy Boy until further notice.” Then, on November 24, the album was mysteriously uploaded to 6ix9ine’s official website with a link to purchase. The link was taken down shortly afterwards. The rapper was reportedly disappointed by the leak, which reportedly led to his decision to release the album on Tuesday.

6ix9ine told DJ Akademiks He Was ‘Disappointed’ By the Album Leak on Nov. 24

Tekashi 6ix9ine album “DUMMY BOY” will be officially released in a few hours to all major outlets. This is the decision of Tekashi himself who despite being disappointed about its leak & his current situation wants his fans to enjoy his music. He says he loves and misses his fans

“Tekashi 6ix9ine album DUMMY BOY will be officially released in a few hours to all major outlets,” DJ Akademiks tweeted on Tuesday morning. “This is the decision of Tekashi himself who despite being disappointed about his leak & his current situation wants his fans to enjoy his music. He says he loves and misses his fans.”

While it is still unclear how the album was leaked, or who did the leaking, Newsweek reports that one of Dummy Boy’s producers may have uploaded it. Murda Beatz, who worked with 6ix9ine on “FEFE”, recently teased the album’s artwork on Instagram with the caption, “I HAVE THE ALBUM SHOULD I…” Fans have pointed to this post, which features the presumed album artwork, as proof that Murda Beatz, is responsible. It has since been deleted from Murda Beatz’s account. 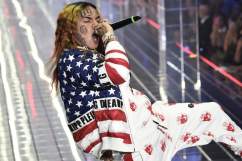