Keeping Up With the Kardashians season 15 continues to air coverage of the aftermath from Tristan Thompson’s cheating scandal and tonight airs another episode, at 9 p.m. ET/PT and 8 p.m. CT, on the E! channel. Episode 14 gives an inside look at the scandal that rocked Khloe Kardashian’s world, and the birth of her baby, True Thompson. Plus, Khloe’s sister Kim butts heads with Tristan over his indiscretions. For those who would like to watch tonight’s show, but you don’t have cable or cannot get to a television, you can watch the E! network on your computer, phone or streaming device by signing up for one of the following cable-free, live-TV streaming services:

In addition to an extrensive, on-demand streaming library, Hulu also offers a bundle of 50-plus live TV channels, including the E! netowrk. You can sign up for “Hulu with Live TV” right here, and you can then watch a live stream of the show on your computer via the Hulu website, or on your phone, tablet or streaming device via the Hulu app.

If you can’t watch KUWTK live, “Hulu with Live TV” comes with both its extensive on-demand library (which has most shows available after they air) and 50 hours of Cloud DVR storage (with the ability to upgrade to “Enhanced Cloud DVR,” which gives you 200 hours of DVR space and the ability to fast forward through commercials).

The E! network is one of 85 channels included in the main Fubo bundle. You can sign up for a free 7-day trial right here, and you can then watch a live stream of the show on your computer via the FuboTV website, or on your phone, tablet or streaming device via the FuboTV app.

If you can’t watch episode 12 of KUWTK live, FuboTV comes with 30 hours of Cloud DVR (with the ability to upgrade to 500 hours), as well as a “72-Hour Lookback” feature, which allows you to watch most shows up to three days after they air even if you forgot to record them.

Episodes of Keeping Up With the Kardashians are also available for you to purchase on Amazon.

Up until last week’s episode of KUWTK, Tristan Thompson had appeared to be a dream come true for Khloe Kardashian, who had been through so many ups and downs in the past, throughout her relationship with ex-husband Lamar Odom. While Khloe was married to Lamar, he battled drugs and cheated on her throughout the marriage. He nearly died after an overdose at a brothel and even though they were headed for divorce, Khloe was at his side through his recovery.

Tristan, unlike Khloe’s past relationships, appeared to treat her like gold. So, to hear that Tristan had been cheating on Khloe with multiple women, it was quite surprising. Khloe’s family was shocked, disgusted, and heartbroken over the ordeal, especially since she was at the end of her pregnancy. Khloe ended up giving birth to her daughter, right in the middle of the aftermath of Tristan’s cheating.

Episode 14 airs tonight and it is called “Vegas, Baby!” and the plot description of the episode reads, “Khloe and Tristan return to Los Angeles with True, but Kim and Tristan have unresolved tension over his infidelity; Kourtney travels to Washington, D.C., to speak in front of Congress.”

Fortunately, it appears that Khloe and Tristan have worked hard at repairing their relationship and they are still together today. Recently, Khloe wrote online to her social media followers about how she decided to with her man when dealing with the cheating scandal. According to Us Weekly, Khloe wrote, “I try to live a very honest and positive life. But I know that God doesn’t make mistakes … He wants me to go through certain things so I can grow and I [was] given a platform to hopefully help others not feel so alone and so we can grow together. I find strength [in] so many people. The greatness in my life definitely outweighs [any] bad thing that has ever happened to me. I focus on the beauty of it all.” Khloe also wrote that she will never understand why or how Tristan could have cheated on her.

Keeping Up With the Kardashians airs on Sunday nights on the E! network. Tune in to see the latest on one of the most famous families in the nation. 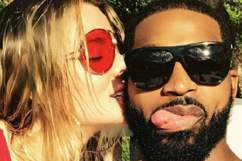 Tristan Thompson’s Cheating Scandal: Who Did He Cheat on Khloe With?