Lil Pump was performing at the Rock City concert venue in England on Friday, when the concert was reportedly derailed by reports of a “smoke bomb.” According to TMZ, tear gas filled the venue and caused the show to be called off, reportedly causing at least two minor injuries. There have been no reports of serious injuries, despite paramedics being called to the scene.

A spokesperson for the Nottingham Police Department told TMZ that they got a call around 9:30 PM for a reported smoke flare inside the venue. Pump, born Gazzy García, and his crew reportedly evacuated the venue along with his fans. It’s currently unclear who launched the attack, but law enforcement are confident that the incident was not terrorism.

Police Are Still Unsure Who Launched the Smoke Bomb Attack

In the video taken above, you can see members of the audience evacuating the venue and covering their faces. The lights were turned on at this point and a woman can be heard yelling out towards the 30 second mark. It is unclear where the yell is originating from.

HipHopDX reports that Lil Pump was slumped over and nearly unconscious after the tear gas was dispelled. After the venue was evacuated, however, Pump rebounded and continued the show for his fans outside. He hopped on top of his tour bus and performed his popular song with Kanye West, “I Love It”, for those who remained after the attack. Watch a clip of his impromptu performance below.

Lil Pump Continued to Perform for His Fans Outside the Venue

.@lilpump is now performing on his tour bus after the major incident at #RockCity in #Nottingham pic.twitter.com/m6xyDsEEby

After the performance, Pump uploaded a video of himself recounting what happened. “Yeah man, some dumba*s threw a some bomb in the show,” he said. “F*cked up the whole show.” A voice can be heard correcting Pump, saying that someone threw three smoke bombs during his performance.

This is only the latest issue that Pump has faced regarding his tour schedule. The “Gucci Gang” rapper had to cancel a whopping 15 shows after he was arrested during a Miami traffic stop and caught violating his parole in September. According to TMZ, Pump was to be paid $70,000 per show on his upcoming tour, making his total losses for the cancelled shows somewhere around $1 million.

Pump addressed the situation on Twitter on September 3. “”Listen up y’all, I’ma get straight to the point: Y’all seen what happened in Miami, I got arrested or whatever over some bullsh*t,” he said. “So I’m on probation in L.A., I just violated my P.O., so I gotta go in and do a couple of months. But I got some crazy ass sh*t dropping while I’m in there so I’ma have something for y’all don’t worry. Listen kids, stay in school, don’t f*ck up like me.”

Pump was recently featured on the single “Arms Around You” alongside Maluma, Swae Lee, and the late XXXTentacion. He’s also rumored to be on Kanye West’s upcoming studio album Yandhi, following their successful collaboration “I Love It.”

ILL BE BACK OUT ?
MY MANAGEMENT WILL BE HANDLING MY SOCIALS FOR NOW #FreePump pic.twitter.com/kxvXFRyMFR 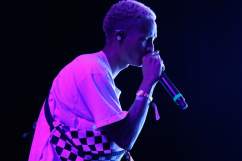 How to Stream & Download Jaden Smith’s ‘The Sunset Tapes’