A viral death hoax claims that Bill Nye, the former host of the beloved series Bill Nye the Science Guy is dead. Nye, 63, is said to have died earlier this week from unknown causes, but the report, which spread on Facebook and Twitter, proved to be false.

According to Monsters and Critics, a Facebook page dedicated to Nye, who is also a mechanical engineer, released a statement providing details on his supposed death. Several users took to the comment section and to Twitter to voice their sadness over the hoax. “I almost started crying bwcause [sic] I saw this fake thing about Bill Nye being dead,” wrote one agitated user.

The holidays are here, and when you pick up any of my exclusive merchandise from @represent, 100% of the proceeds will benefit The Solutions Project (@100isnow) and their mission to make clean energy affordable & accessible for all. Available for a limited time only, click the link in my bio to get yours!

Other fans were less humored by the death hoax. “Whatever a*shole thought it would be funny to report that Bill Nye is dead when he’s alive and we’ll,” wrote one user. “I hope you step on a LEGO.” Check out additional Twitter reactions below.

People think you are dead man

SO BILL NYE IS SUPPOSEDLY DEAD

Whatever asshole thought it would be funny to report that bill nye is dead when he’s alive and we’ll… I hope you step on a LEGO. #billnyethescienceguy

This is not the first time that Bill Nye has head to deal with rumors of a death hoax. In 2012, it was widely reported that he killed in an accident when trying to fill a hot air balloon by mixing baking soda and vinegar, which produces carbon dioxide. The story was reported by fictitious news site The Onion, but it was soon picked up other news sources.

At a meeting in DC. The White House is below. Exciting times….

Many believe that the death hoax was started as a backlash against Nye’s comments about creationism. In a video titled “Creationism Is Not Appropriate for Children”, Nye stated that the theory is blatantly incorrect. “I say to the grownups, if you want to deny evolution and live in your world, in your world that’s completely inconsistent with everything we observe in the universe, that’s fine, but don’t make your kids do it because we need them,” he explained in the video. “We need scientifically literate voters and taxpayers for the future. We need people that can—we need engineers that can build stuff, solve problems.”

Nye Recently Tweeted from His Personal Account, Proving the Rumors to Be False

Compared to other celebrities, Nye has been plagued by death hoaxes on a semi-regular basis. In 2014, another round of rumors and speculation about his death surfaced. This time, however, it was not a balloon accident that led to his death; it was homicide. The Inquisitr reports that Nye was murdered by a suspect that claimed it was God that made him do it.

Time is running out to pick up your “Science & Chill” gear. All the proceeds go to a great cause – to save the earth, for us. Link in bio to get yours!

In 2016, a third death hoax involving Nye surfaced. According to the Inquisitr, a Facebook page was made to honor his death, which was said to have occured on May 2. Despite the specificity, Nye posted photos of himself at the Climate Action Summit in Washington D.C. on May 6, effectively disproving the hoax. 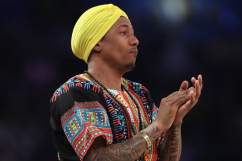