Cardi B announced her split from husband Offset via Instagram on Tuesday night. The rapper stated that things had not been working between them for some time, and that “it’s nobodies fault it’s just like I guess we grew out of love.”

Swipe #CubanDoll got exposed by her ex-bestie, #Mmmforeign. Now Mmmforeign says that Cuban DOLL smashed a couple industry niggas aaannnnddd she was planning on having a 3some with #Offset and her. So the 3some would've been Offset, Cuban Doll, and Mmmforeign. She posted screenshots of the alleged convo with Offset ??‍♀️ FIRST OF ALL…I cnt get over Offset ass saying he's going to be in "New o lean" ???? Oh and all this supposedly happened back in June while #CardiB was pregnant. ??‍♀️ Cuban denies all this, especially since she's a huge Cardi Fan. Do yall think its true???! ??? #spillinjuices

The alleged text conversations took place in June of this year when Cardi was pregnant with their Offset’s daughter Kulture Kiari Cephus. The screenshots show Summer Bunni and Offset discussing a time and place to meet up with Cuban Doll. “I want u and Cuban can you make that happen?” Offset appears to ask, before assuring Summer Bunni that he will be able to fly Cuban Doll out to where he was currently staying.

Cuban Doll has denied the rumors of her alleged hook up with Offset, and got on Twitter yesterday evening to air out her frustrations. “These b*tches be so ready to switch sides it’s crazy it’s like we was never friends,” she wrote, before going on to tweet: “How could you turn on me? B*tches would love to help destroy me…” Check out the original tweets below.

How could you turn on me ?

Bitches would love to help destroy me …

Cuban Doll hails from Dallas, Texas, and previously worked as a model. She rose to musical prominence with the release of her 2018 mixtape Aaliyah Keef, and is signed to 740 Project / Capitol Records. According to XXL, she’s also currently working on her sophomore release, Cuban Link Pt. 2.

Bossip reports that shortly before Cardi B announced that she was breaking up with Offset, the Migos spitter posted a brief message denying that he ever spoke with Cuban Doll or Mmmforeign. “I never tried to convo with you h*es,” he wrote. “Cap Cap Cap. Leave me and my fam out the cap. Bust *ss h*es with no bag. Good on the thots.”

When asked about the rumors of Offset’s infidelity, Cardi B told W Magazine that it took a toll on their relationship. “Every single day there’s rumors about me and my dude,” she said. “And it almost drives me crazy, because I start to believe them. I don’t have no proof. I don’t have receipts. But I just got to know my man.”

“I cannot be feeling insecure, to a point that I would drive my dude away, because these people want that to happen,” she added. Shortly after Cardi posted the video announcing their split, Offset left a comment that read: “Y’all won.”

I never went to new or lean leave me alone ! ??‍♀️

UPDATE: Cuban Doll responded to the Offset allegations on Thursday morning by tweeting: “I never went to new or lean leave me alone!” 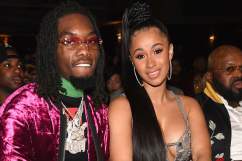 WATCH: Cardi B Announces She & Offset Have Broken Up