The feud between Kanye West and Drake shows no signs of slowing down. A few months after West put Drake on blast on Instagram, the rapper took to Twitter to go on a rant about how Drake owes him an apology for “trying to take food out your idols kids mouths.”

Shortly after West concluded his rant, Drake reportedly laughed the whole matter off. The Shade Room posted a screenshot from what appears to be the rapper’s Snapchat with a black background and five laughing emojis. Check out the screenshot below.

The whole ordeal may turn out to backfire for Drizzy, however. He tried to contact West to clear the song “Say Whats Real”, which samples West’s 2008 track “Say You Will.” West posted a screenshot of the request along with the caption: “This proves sh*t faker than wrestling.” West added that Drake needs to stop being passive aggressive towards him. “Sending purple emojis When I’m dealing with mental sh*t I need my apologies now,” he wrote. “Not through Scooter [Braun] either Not through Travis [Scott].”

Things took a confusing turn about an hour after West’s initial rant, as he updated followers with the news that Drake had called him to clear things up. “Drake finally called,” he wrote. “Mission accomplished.” Just when it seemed as though the two rap superstars had squashed their beef, however, West tweeted: “By the way… Not cleared.”

While the purpose for Drake clearing a track from 2009 remains to be seen, many have speculated that he was planning to releases his breakout mixtape So Far Gone on streaming services for its tenth anniversary. It’s currently unclear whether these speculations are true or whether Drake will be able to proceed without West’s clearance permission.

This Twitter exchange comes only a few months after Drake appeared on LeBron James’ HBO series The Shop, where he claimed that West betrayed his confidence and leaked information about his personal life. “[Kanye] sold me on this whole speech, like, ‘I’m in a great place, I’m making money, I’m a father’,” he revealed.

“I wanna be Quincy Jones and help you, but in order to do that, you gotta be transparent with me and you gotta play me your music and tell me when you’re dropping, and I know you don’t like to do that’.” he added. “I was in the studio and I guess we all felt a genuine vibe from it. I knew something was gonna come up about my kid,” the rapper added. “They had to add the deadbeat dad thing to make it more appealing, which is fine. The mom and dad thing… Whatever. You don’t even know my family.”

For a more detailed rundown of West and Drake’s relationship over the years, including the 2017 album they were planning to release, click below. 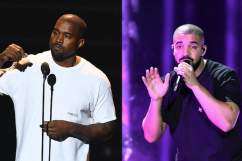