Fans of Jeopardy watched contestant Jackie Fuchs achieve victory four times in a row. Her win streak began December 14, 2018. She earned $87,089 before falling short on her fifth day of competition.

Six days until my @Jeopardy episode, which airs on Friday, December 14th. It's an honor just to have been invited on. Seriously… pic.twitter.com/kXBDkGaJqM

Viewers may have noticed that Fuchs has a very familiar face. She formerly went by the name of Jackie Fox, when she was the bassist for the popular band the Runaways in the 1970s.

After leaving the music scene, Fuchs became a lawyer.

1. Jackie Fuchs Joined the Runaways When She Was Just 15

Jackie Fuchs was born December 20, 1959, and was raised in California’s San Fernando Valley. She grew up surfing and began going to the Sunset Strip to dance as a young teenager.

Fuchs explained in a 2015 interview with the Huffington Post that she was approached by Rodney Bingenheimer during the spring of 1975 while she and her friends were partying at the Starwood. He asked if she played an instrument. Fuchs answered that she played the guitar.

That chance conversation set off a chain of events that led to Fuchs meeting producer Kim Fowley and becoming a member of the new all-female rock band the Runaways. Fuchs learned to play the bass in order to be part of the band and began going by the last name Fox. The band included singer Joan Jett, drummer Sandy West, lead guitarist Lita Ford, and singer Cherie Currie.

2. Fuchs Accused Manager Kim Fowley of Raping Her When She Was 16 & That Other Band Members Had Been Present During the Assault

Jackie Fuchs dropped a bomb in that 2015 Huffington Post interview. She revealed for the first time that the Runaways band manager, Kim Fowley, had reportedly raped her on New Year’s Day 1976 when she was 16. The band had performed in Orange County on New Year’s Eve and went to a hotel to celebrate afterward.

Fuchs shared that a man gave her the party drug Quaalude. She explained that most of the people at the party were other teenagers and the rest of the band, with the exception of Lita Ford.

Her friend Helen Roessler explained that Fuchs laid down on a bed and was struggling to remain awake. She said she witnessed Kim Fowley begin to undress Fuchs. “Nobody seemed to really care. It was really weird. Everybody was sitting in there alone with themselves. It felt like everyone was detached or trying to pretend like nothing was going on.”

Fuchs explained that she remembers waking up and realizing that “Kim Fowley was raping me, and there were people watching me.” She said that bandmates Joan Jett and Cheri Currie watched it happen.

“Anyone who truly knows me understands that if I was aware of a friend or bandmate being violated, I would not stand by while it happened. For a group of young teenagers thrust into ’70s rock stardom there were relationships that were bizarre, but I was not aware of this incident. Obviously Jackie’s story is extremely upsetting and although we haven’t spoken in decades, I wish her peace and healing.”

Cherie Curry wrote on Facebook in 2015, “All I can say is if Joan, Sandy and I saw an unconscious girl being brutally raped in front of us, we would have hit him over the head with a chair.”

Fuchs remained with the band after the alleged assault. She said that she never talked about it. She left the band in 1977.

Kim Fowley died of cancer in January 2015 at the age of 75. He always denied any inappropriate relations with the members of the Runaways. He was quoted in a 2013 biography on the band, “They can talk about it until the cows come home but, in my mind, I didn’t make love to anybody in the Runaways nor did they make love to me.”

3. Jackie Fuchs is an Advocate for Sexual Assault Survivors

Learn how pluralistic ignorance leads to bystander apathy during a sexual assault. https://t.co/nBQcULqmqI via @YouTube

Since sharing her story from her time with the Runaways, Jackie Fuchs has become a vocal advocate on behalf of sexual assault victims. According to her website, she has appeared on shows including Crime Time, the “Q” on NPR and the Madeleine Brand Show to talk about sexual assault and why witnesses don’t always speak up or intervene.

The risks vs rewards of stepping forward to stop a sexual assault. https://t.co/LyXRmITYWF via @YouTube

In April 2016, Fuchs gave the keynote address at a conference at Carnegie Mellon University. She focused on a psychology term known as “pluralistic ignorance.” She talked about her alleged experience being raped by her band manager, and how the several people in the room did nothing to stop it. Fuchs explained, “The sheer number of people in the room was actually working against me… the more people that witness a wrongful act, the less likely they are to do anything about it.”

Jackie Fuchs was more than a rock star. She had excelled in high school and continued her education after leaving the Runaways. She graduated from UCLA in 1988 with a bachelor’s degree in Linguistics, according to her Linkedin profile. Fuchs then went on to Harvard Law School, earning that degree in 1991.

Her profile does not include what she was doing after graduating from law school. In 1996, she went to work for ICM Partners in Beverly Hills. She wrote that her job involved negotiating “film and music agreements for talent and producers.” Her subsequent jobs also involved legal work in the entertainemnt industry.

Fuchs has been self-employed since 2010. She describes herself as a “business and legal affairs consultant representing artists and companies in film, television and film/tv music development, production, and distribution.”

My episode of Who Wants to Be a Millionaire airs this Friday, Sept. 6. @MillionaireTV pic.twitter.com/dNgwdU4xKr

Jackie Fuchs is an experienced game show contestant. According to Live For Live Music, she appeared on the “Dating Game” in 1980. She also competed on the quiz show “The Chase” in 2013. In September of 2013, Fuchs won $1,000 on “Who Wants to be a Millionaire.”

Fuchs lives in Los Angeles and has two cats named Xena and Cleopatra.

My friend Amy made some awesome cookies for our Jeopardy viewing party! pic.twitter.com/cjHdGg7nJN

Her friends have apparently been very supportive of her Jeopardy run. Fuchs shared a photo on December 14; her friend Amy made cookies that were decorated like the Jeopardy board. 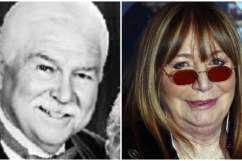